"Portraits of real women are comparatively rare in [Renaissance] Venice and many of those that do exist are paired with portraits of men. Considerably more common are the typically Venetian belle donne. These 'beautiful women', at once enigmatic and idealised, are often erotically charged and armed with symbolic attributes. While not one of these beauties can be identified with a historical person, they have often been read as portraits, specifically as portraits of individual representatives of a certain social class. The subject remains controversial to this day. Bearing in mind their often unashamedly seductive poses, could these ladies be courtesans -- the kind of educated, ladylike prostitutes preferred by Venice's upper classes? Or are they, rather, young brides, whose erotic allures -- along with their virtue -- these portraits were intended to celebrate?

"[A superb example of this is the painting Woman in Blue with Incense Burner, which] almost certainly dates from [the artist] Sebastiano del Piombo's final months in Venice before he followed his patron, the Sienese banker Agostino Chigi, to Rome in 1511. The young lady's features -- the plump round face, fleshy lips, enigmatic stare, pronounced eyebrows and dark blond, centrally parted hair -- match the type of female figure that Sebastiano painted throughout his stay in Venice. The female saints in his altarpiece in San Giovanni Crisostomo in Venice ( c. 1506-10) and Salome (or Judith) in London (1510) might be sisters of the Washington Woman in Blue; Salome even wears the same gown.

"Thrown into relief by a neutral, deep-black background is the half figure of a woman, turned into the picture. Tilting her head to one side, she stares back at us in three-quarter profile, eyeing us out of the corner of her eye; her gaze is hauntingly enigmatic and self-ab­sorbed, at once critically observant and alluring. Her unblemished pale skin glows like ivory, while her golden tresses on one side are bound into a braid from which a few tiny strands of hair tumble down onto her décolleté. An earring with a bead made of glass or metal gleams tantalisingly in the darkness between her hair and cheek. She wears a white chemise with the sleeves ostentatiously rolled up to expose her lower arm and over it a bright blue dress made of shiny silk, whose puffed sleeves are a tour de force of modelling in paint.

"The lower arm laid across the woman's body alerts us to the appar­atus held with impeccable poise in her right hand, where it forms a second focus of attention no less enigmatic than her face. The identiflication of this object is crucial to how the figure is interpreted.

"An inscription added at a later date and several engravings made after the painting in the seventeenth century for a long time led some to see in her the poetess so admired by Michelangelo, Vittoria Colonna (1492-1547), although recent scholarship has shown this to be a myth. Others read the object as an ointment jar, on the basis of which the figure was interpreted as Mary Magdalen -- at least until Fern Rusk Shapley decided it was a lamp, whereupon she became one of the five Wise Virgins from the parable related in the Gospel According to St Matthew (25:1-13). Notwithstanding the frequent objection that there is no other instance of a painting showing a single Wise Virgin, this particular interpretation has remained the dominant one to date. This is how the painting is referred to in the monographs and exhib­ition catalogues of recent decades, and this is the title used by the National Gallery of Art in Washington.

"A closer look at the mysterious object may shed some light on this matter. Standing on a red marble foot whose lower half is lost in the gloom is a curious vessel -- made of brass, to judge by its colour -- consisting of a circular plate and a cylinder surmounted by a blunt cone. The latter is closed at the top but peppered with regularly spaced holes, two of which are emitting tiny sparks and thin wisps of smoke. Such an object could not possibly dispense light. It follows that it cannot be a lamp, but must rather be an incense burner, in which substances are burned so that the fragrant fumes escape through the holes. This has far-reaching consequences for our understanding of the painting: Clearly, we are not dealing with a sacred figure after all, nei­ther the Magdalen nor a Wise Virgin; nor is this a crypto-portrait of a lady in the guise of either one of those biblical figures. ...

"[Instead] the Washington Woman in Blue is ... a remarkably early variant of the Venetian type of the bella donna, who lures and seduces the viewer not just with the blue of her gown, but also synaesthetically with the -- painted -- scent of her incense burner. Unlike those later belle donne who often stand out on account of their explicit eroti­cism, Sebastiano's is a wonderfully restrained, subtle seductress who confines herself to the tiniest of innuendos: the rolled-up sleeves, the earring, the locks of hair tumbling down onto her décolleté and then that painterly evoked fragrance." 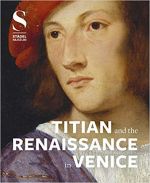