Today's encore selection -- from Brat: An '80s Story by Andrew McCarthy. Andrew McCarthy, who achieved a measure of fame from roles in St. Elmo’s Fire, Pretty in Pink, and Less Than Zero, comments on the strange things that began to happen to him once he became recognized:

"I knew that I was now famous because things that happen to famous people began to happen to me. Strangers gave me things I didn't need, others wanted to have sex with me, and other (more) famous people began to reach out to me. I got a call that Warren Beatty wanted to meet with me: 'Be at the bar of the Polo club on Fifty-Seventh at 7:00 p.m. tonight. Warren wants to talk to you about a project.' We met and the legend obliquely expressed interest in me for a movie, but all I could concentrate on was the bowl of peanuts on the bar in front of us that he devoured, rakishly popping them into his mouth one after another in movie icon fashion. I never heard from him again.

"One day I received a call out of the blue from someone in Andy Warhol’s world asking if I would like to join Andy and some friends for dinner. I quickly said yes, but as the day wore on, my anxiety over the dinner grew. Not long before the appointed time, I called back and concocted a ludicrous story that my cat had jumped out of the window and I had to go and find her; perhaps another time. The woman on the other end of the phone made no pretense of believing me. For years I regretted my timidity, until fairly recently, when I mentioned the incident to my wife as we walked through a Warhol exhibit in a museum. I expected her to scold me for yet another display of my reticence, when she surprised me (as usual) and said, ‘You probably just didn’t want to be treated as an amusement.’

"On another occasion I received a shirt from Tommy Hil­figer in the mail. How the hell did Tommy get my address on West Twelfth Street? Included was a note saying that Tommy loved my work and would like me to have some of his. It was several sizes too large for me, but I wore it out nonetheless. In LA, I participated in a 1980s Hollywood rite of passage by attending a party at the Playboy Mansion. Beautiful young women mingled while James Caan and a few older comedians smoked cigars. I watched 'Hef' descend the grand staircase smoking his pipe, wearing red silk pajamas, a blonde on each elbow. I wandered out of the Tudor Revival villa and stumbled into a peacock. Inside the pool grotto I interrupted a frolicking couple; they didn’t care.

"There were other, less playful examples that my place in the world had changed. I had lost active contact with most of my college classmates, but one evening I went out with a few old acquaintances from school. We ended up back at my apart­ment for a drink. I was still living in the small one-bedroom with the sloping floors and the faulty fireplace. We were chat­ting away, when suddenly one of the guys leaned forward and spat on my floor. I was taken aback.

"'What are you going to do about it?'

"I had known all evening that beneath my former school­mate's 'Good for you' platitudes resided this resentment that epitomized his true feeling. While my wary, even suspicious nature was no doubt responsible for blocking out opportu­nities for friendship and intimacy, there was no denying that I also possessed a vigilant third eye that was perceptive in the ways of falsehood. During this phase and beyond, I used expe­riences such as my classmate's floor spitting as proof of peo­ple's insincerity. I used it to further isolate myself -- to my own detriment.

"It was around this time that strangers also began to approach me and say, 'I met your father.' They would describe how he had stopped them on a street corner, or interrupted them at the next table in a restaurant. My dad had gotten into the habit of asking unsuspecting people if they knew who Andrew McCarthy was. And if they did, he launched in. I would apol­ogize to his victims profusely and slink away, humiliated and mortified. When I pleaded with my father to stop this behav­ior, he dismissed my complaints with a wave of his hand. It took years for me to lose the anger and shame with which I viewed these encounters and finally see them with affection." 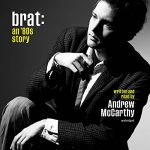