Today's encore selection -- from The Time Traveller's Guide to Elizabethan England by Ian Mortimer. In the late 1500s in Elizabethan England you would likely drink as much as a gallon of beer a day and drink such brands as Dragon's Milk and Lift-Leg. If you were sick you would add an egg yolk and honey.

"Beer and ale are regarded as more or less synonymous in the modern world, but they are very different things in Elizabethan times. Beer is made from malt barley, water and hops and keeps well -- and the longer you keep it before it goes stale, the better it will be. Ale is not made with hops and has to be drunk quickly, within three days at the most; and is much less popular as a result. However, it can be made quickly to a great strength, using a high ratio of malt to water, and so it is still brewed. It is also regularly used by cooks in their sauces.

"The quantities drunk will no doubt surprise you. When entertaining the queen in 1577 Lord North orders 3,996 gallons of beer and 384 gallons of ale. The daily allowance for a man -- whether he be a servant or a nobleman -- in many large houses is a gallon of beer, and this is not a notional amount: people really do drink that much on a regular basis. And some of it is strong stuff. The best beer is called March beer, because that is when it is brewed, and if you drink a gallon of that in a day you will not be good for much else. In some places you find it called 'double beer', because double the amount of malt is used, which means it can be as intoxicating as wine. Small beer for the servants is made with less malt in relation to the quantity of water; it is therefore not as strong, nor does it keep for more than a month.

"As with wine, beer is stored in barrels and decanted into leather jacks or earthenware bottles as required. Bottled beer can be purchased in stoneware bottles bearing the face of a rotund bearded man. However, if you buy one, drink it quickly for the yeast in the beer will continue to ferment, the pressure will build up and the bottle will eventually explode. If you want to taste a good range, you can find them at any country fair. They have poetic names like their modern equivalents. William Harrison lists Huffcap, The Mad Dog, Father Whoreson, Angels' Food, Dragon's Milk, Go-by-the-Wall, Stride Wide and Lift-Leg. While these have the power to turn those who drink them into 'ale-knights who ... will not dare to stir from their stools but sit pinking with their narrow eyes, as half-sleeping, until the fume of their adversary be digested', beer and ale are not without their healthy connotations. Some beers are brewed with herbs, thereby containing the essence of something health-giving. Others are made into restorative possets, through the addition of spices and mille. Alternatively you might want to add an egg yolk and sugar or honey, thereby making caudled ale, which is often recommended for the sick. 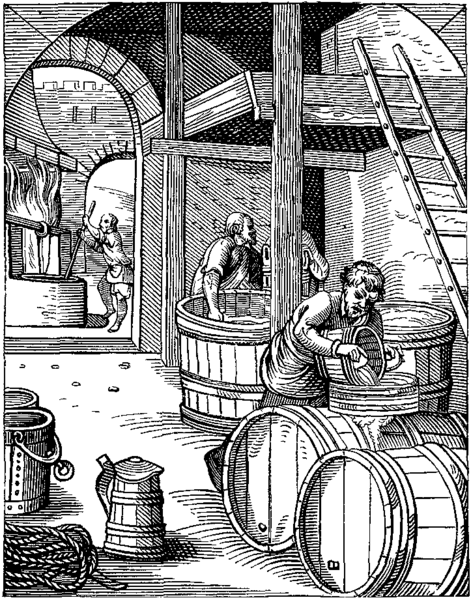 "Not everyone approves of English ale and beer. Mediterranean visitors in particular cannot understand the Englishman's love of it. Alessandro Magno writes in his journal that English beer is 'healthy but sickening to taste. It is cloudy like horse's urine and has husks on top.' Andrew Boorde is even more disparaging about Cornish ale: 'it will make you spew ... It is like wash that pigs have wrestled in'."