Today's selection -- from The Rise of Rome by Anthony Everitt. In 494 BCE, the people of Rome staged one of the most remarkable and imaginative protests in world history. Though this protest brought some reform, it underscored the seemingly never-ending struggle of the plebs against the major landowners and ruling elite:

"It was the strangest spectacle seen since the foundation of Rome. A long stream of families could be observed leaving the city in what looked like a general evacuation. They walked southward and climbed a sparsely populated hill, the Aventine, which stands across a valley from the Palatine, the site of Romulus's first settlement. They were, broadly speaking, the poor and the disadvantaged -- artisans and farmers, peasants and urban workers. They carried with them a few days' worth of food. On arrival they set up camp, building a stockade and a trench. There they stayed quietly, like a weaponless army, offering no provocation or violence. They waited, doing nothing.

"This was a mass protest, one of the most remarkable and imaginative in world history. It was like a modern general strike, but with an added dimension. The workers were not simply withdrawing their labor; they were withdrawing themselves. ... 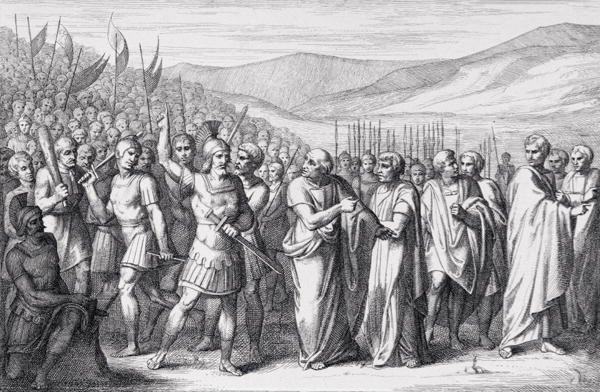 The Secession of the People to the Mons Sacer, engraving by B. Barloccini, 1849.

"What, then, was their complaint? ... The poor were burdened with debt and arbitrary treatment by those in authority; they sought redress. Many had reached a point where the only thing they owned with which to repay their debts was themselves -- their labor, their bodies. In that case, they were able to enter into a system of debt bondage, known as nexum, literally an interlacing or binding together. In the presence of five witnesses, a lender weighed out the money or copper to be lent. The debtor could now settle what he owed. In return he handed himself over -- his person and his services (although he retained his civic rights). The lender recited a formula: 'For such and such a sum of money you are now nexus, my bondsman.' He then chained the debtor, to dramatize his side of the bargain.

"This brutal arrangement did not in itself attract disapproval, for it did provide a solution, however rough-and-ready, to extreme indebtedness. What really aroused anger was the oppressive or unfair treatment of a bonded slave. The creditor-owner even had the right to put him to death, at least in theory. Livy tells the story of a victim, an old man, who suddenly appeared one day in the Forum. Pale and emaciated, he wore soiled and threadbare clothes. His hair and beard were unkempt. Altogether, he was a pitiable sight. A crowd gathered, and learned that he had once been a soldier who commanded a company and served his country with distinction. How had he come to this pass? He replied:

While I was on service during the Sabine war, my crops were ruined by enemy raids, and my cottage was burnt. Everything I had was taken, including my cattle. Then, when I was least able to do so, I was expected to pay taxes, and the result was I fell into debt. Interest on the borrowed money increased my burden; I lost the land which my father and grandfather had owned before me, and then my other possessions. Ruin spread like an infection through all I had. Even my body wasn't exempt, for I was finally seized by my creditor and reduced to slavery -- no, worse, I was hauled away to prison and the torture chamber ...

"In 326, a scandal led to the reform of debt bondage, the nexum. An attractive youth sold himself into bondage to a creditor of his father. The creditor regarded the youth's charms as an additional bonus to sweeten the loan and tried to seduce his new acquisition. Meeting resistance, he had the boy stripped naked and flogged. Bleeding from the lash, the boy rushed out into the street. An angry crowd gathered and marched on the Senate House for general redress.

"The consuls, taken aback conceded the point. They won the People's approval of a law limiting the nexum to extreme cases, which, in addition, had to be adjudicated by a court. As a rule, to repay money lent him, a debtor's property could be seized, but not his person."