Today's selection -- from Wooden: A Coach's Life by Seth Davis. In the late 1800s, many religious scholars viewed athletics as a tool of the devil. But liberal Protestant ministers disagreed -- and launched a new movement called 'muscular Christianity.' In this spirit, it fell to young teacher at the International YMCA Training School named James Naismith to invent a new game called "basket ball," and it was the YMCA that spread this new game throughout the country:

"The organization that invented and proselytized 'basket ball', (as it was long known), the Young Men's Christian Association, or YMCA, advertised its mission as promoting a person's 'mind, body and spirit.' ... [James] Naismith grew up on a farm (in Ontario, Canada) where he learned the value of a hard day's work. He originally intended to become a minister, but upon graduating from the theological college at Montreal's McGill University, Naismith decided he could have just as much impact through athletics as he could through the ministry. In 1890, he began formally studying at the YMCA's training school in Springfield, Massachusetts.

"In those days, many religious scholars viewed athletics as a tool of the devil. A group of liberal Protestant ministers rebutted that way of thinking by launching a movement called 'muscular Christianity.' In the summer of 1891, the head of the Springfield YMCA's training school's physical education department, Dr. Luther Gulick, assigned Naismith the task of creating a new game that students could play indoors during the winter. Naismith used a phys ed class as his laboratory, but his first few attempts proved futile. Gymnastics was too boring, football and rugby were too rough, and there wasn't enough space in the gymnasium to play soccer or lacrosse.

"Sitting in his office, Naismith tinkered with adapting a game he used to play as a boy in Canada called 'Duck on a Rock,' where points were scored by lofting small rocks so they would land on a bigger rock. But he was still concerned things would get too rough. That's when he experienced his eureka moment: there should be a rule against running with the ball! If the players couldn't run, they wouldn't be tackled. And if they weren't tackled, they wouldn't get hurt. 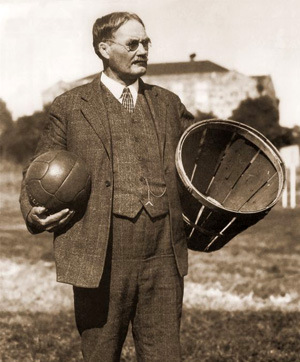 "Excited by his breakthrough, Naismith sketched out thirteen rules using just 474 words. The rules did not include dribbling, so the players were stationary, and therefore safe. He then asked the building's superintendent to fetch him a pair of eighteen-inch boxes to use as goals. The superintendent didn't have any boxes, but he offered a couple of peach baskets instead. Naismith decided these would have to do.

"The class consisted of eighteen students, and the first game featured nine men on each side. It was an instant hit. In the months that followed, Naismith continued to develop and modify his invention in the hope that other YMCAs and athletic clubs would adopt it in coming winters. He had two means of spreading the word. The first was the YMCA's official publication, The Triangle, which was delivered to clubs across the country. The second was the army of clergymen who came to study under Naismith at the training school in Springfield."