Today's selection -- from The Most Dangerous Man in America by Mark Perry. In 1934, General Douglas MacArthur and President Franklin D. Roosevelt clashed verbally in one of the worst confrontations between a senior military offi­cer and a president in American history. Roosevelt was determined to minimize the budget deficit in the midst of one of the country's most perilous economic times, and so had proposed that the army's budget be cut in half:

"In early March 1934, [Army Chief of Staff] Douglas MacArthur and [Secretary of War] George Dern were shown the proposed cuts in army funding for 1935. Both men were shocked. They had received no prior notice of the cuts and had not been consulted on them. Nor had [President Franklin] Roosevelt given MacArthur any indi­cation of the future budget plans during their [many] dinners together. Roosevelt based his decision on a report from the Bureau of the Budget, which rec­ommended cuts to the army budget of some 51 percent, a drawdown that, both MacArthur and Dern believed, could fatally erode military readiness [at a time of growing military mobilization in Europe's fascist states]. Dern told MacArthur that he would ask for a meeting with Roo­sevelt to present his views, and that MacArthur should accompany him. MacArthur agreed, hoping that Dern's voice, when added to his own, would prove persuasive. One week later, the two met the president in the Oval Office. In what became a legendary face-off, MacArthur and Roo­sevelt got involved in a heated exchange that led to a near break between the two -- one of the worst confrontations between a senior military offi­cer and a president in the country's history. 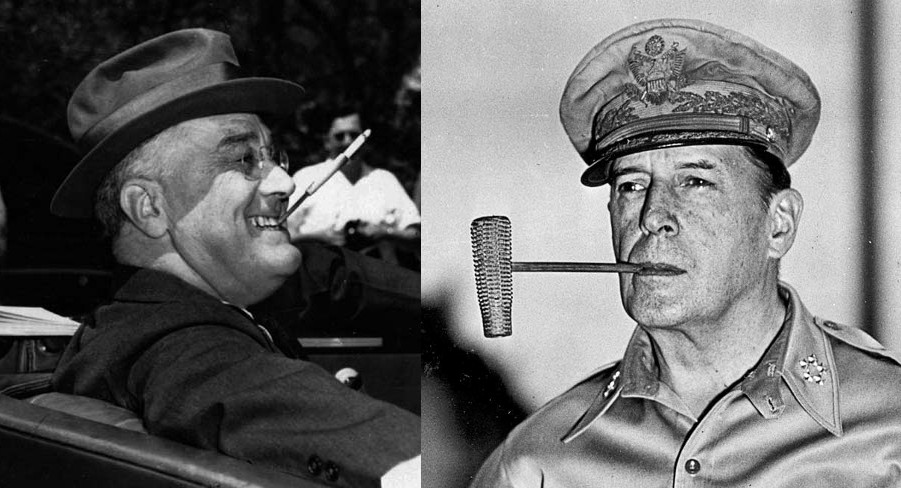 "The Oval Office meeting began cordially, with Dern reviewing the threats the United States faced. Roosevelt listened politely, but as Dern continued to talk, the president grew irritated. There was something in Dern's voice that grated on Roosevelt. Suddenly, his irritation got the best of him -- and he turned on his secretary of war, berating him and, in MacArthur's words, 'using the biting diction' he usually reserved for his political enemies. 'Under his lashing tongue, the Secretary grew white and silent,' MacArthur later remembered. MacArthur weighed in, hoping to ease the confrontation. The country's safety was at stake, he told Roosevelt. But the president turned on him as suddenly as he had turned on Dern. Roosevelt's face was ashen with contempt. 'He was a scorcher when aroused,' MacArthur later wrote. 'The tension began to boil over.' It was at this point, MacArthur later confessed, that he 'spoke recklessly' and 'said something to the general effect that when we lost the next war, and an American boy, lying in the mud with an en­emy bayonet through his belly and an enemy foot on his dying throat, spat out his last curse, I wanted the name not to be MacArthur, but Roosevelt.' MacArthur's words hung in the air. Roosevelt could hardly believe what he'd heard. He wheeled on MacArthur and bellowed his re­sponse: 'You must not talk that way to the President!'

"MacArthur, suddenly realizing what he'd said, backtracked. 'He was, of course, right,' he later wrote, 'and I knew it almost before the words had left my mouth. I said that I was sorry and apologized. But I felt my army career was at an end. I told him he had my resignation as Chief of Staff.' With that, MacArthur turned to leave the room. But even be­fore he reached the door, Roosevelt mastered his anger ('his voice came with that cool detachment which so reflected his extraordinary control,' MacArthur remembered) and dampened the confrontation. 'Don't be foolish, Douglas,' he said, 'you and the budget must get together on this.' MacArthur left the room quickly, then waited on the White House porch for Dern to appear. When he did, he was beaming, as if the confrontation had not occurred. 'You've saved the Army,' Dern said. But MacArthur felt defeated and, without warning, was suddenly over­come by nausea. He looked at Dern and then, leaning over, vomited on the White House steps."