Today's selection -- from Cubed by Nikil Saval. By the mid-1800s, that strange creature, the office worker, was starting to be more and more prevalent in American cities. The 1855 census recorded clerks as the New York City's third largest occupation, behind servants and laborers. The office worker didn't seem to do or make anything, in fact, he seemed to do little but copy things. But the emerging class of office workers wanted to differentiate themselves from mere laborers, and the best way to do that was through their attire:

"[In America in the 1800s, there was] the sense that office work was unnatural. In a world in which shipping and farming, building and assembling, were the order of work, the early clerical worker didn't seem to fit. The office clerk in America at the high noon of the nineteenth century was a curious creature, an unfamiliar figure, an inexplicable phenomenon. Even by 1880, less than 5 percent of the total workforce, or 186,000 people, was in the clerical profession, but in cities, where the nation's commentariat was concentrated (who themselves tended to work in office-like places), clerks had become the fastest-growing population. In some heavily mercantile cities, such as New York, they had already become ubiquitous: the 1855 census recorded clerks as the city's third largest occupational group, just behind servants and laborers.

"For many, this was a terrible development. Nothing about clerical labor was congenial to the way most Americans thought of work. Clerks didn't work the land, lay railroad tracks, make ammunitions in factories, let alone hide away in a cabin by a small pond to raise beans and live deep. Unlike farming or factory work, office work didn't produce anything. At best, it seemed to reproduce things. Clerks copied endlessly, bookkeepers added up numbers to create more numbers, and insurance men literally made more paper. For the tobacco farmer or miner, it barely constituted work at all. He (and at that point it was invariably a he) was a parasite on the work of others, who literally did the heavy lifting. Thus the bodies of real workers were sinewy, tanned by the relentless sun or blackened by smokestack soot; the bodies of clerks were slim, almost feminine in their untested delicacy.

"The lively (and unscrupulous) American press occasionally took time to level invectives against the clerk. 'We venture the assertion that there is not a more dependent or subservient set of men in this country than are the genteel, dry goods clerks in this and other large cities,' the editors of the American Whig Review held. Meanwhile, the American Phrenological Journal had stronger advice for young men facing the prospect of a clerical career. 'Be men, therefore, and with true courage and manliness dash into the wilderness with your axe and make an opening for the sunlight and for an independent home.' Vanity Fair had the strongest language of all: clerks were 'vain, mean, selfish, greedy, sensual and sly, talkative and cowardly' and spent all their minimal strength attempting to dress better than 'real men who did real work.' ... 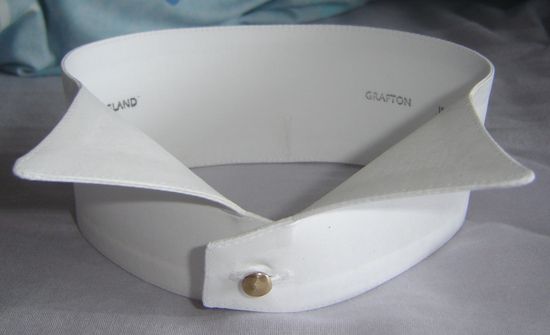 "Clerks' attire was a glaring target for the barbs of the press, since the very concept of business attire (not to speak of business casual) came into being with the mass appearance of clerks in American cities. 'In the counting-room and the office,' wrote Samuel Wells, the author of a 'manual of republican etiquette' from 1856, 'gentlemen wear frock coats or sack coats. They need not be of very fine material, and should not be of any garish pattern.' Other fashion advisers pointed to a whole host of 'business coats,' 'business surtouts,' and 'business paletots,' which you could find at new stores like Brooks Brothers. Working-class Americans would be seen in straw hats or green blouses; what distinguished the clerk was his collar: usually bleached an immaculate white and starched into an imposing stiffness. But collared business shirts were expensive, so stores catering to the business customer began to sell collars by themselves, half a dozen collars running to under half of what a cheap shirt would cost. The white collar, detachable and yet an essential status marker, was the perfect symbol of the pseudo-genteel, dual nature of office work."