Today's selection -- from Saving Mona Lisa by Gerri Chanel. After World War I, the staff of the Louvre became keenly aware of the vulnerability of its treasures. During the ten years before World War II, they developed a detailed plan on how to evacuate and store the art of the Louvre should the need arise. On August 25, 1939, after Great Britain and Poland had concluded a pact of mutual assistance, war became imminent. That evening, the packing began:

"From all corners of the museum, workers removed the top priority movable paintings, antiquities, and objets d'art -- from religious relics to furniture to the crown jewels -- from walls, pedestals and cases. As paintings were removed, first from the walls and then from their frames, workers marked the empty spaces with chalk to note their location to facilitate rehanging upon their return. 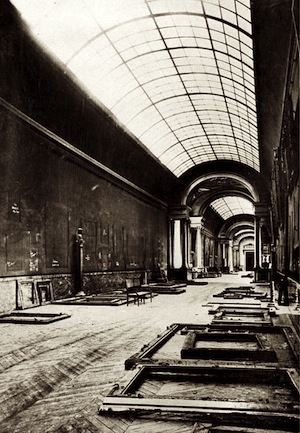 "Workers took items along the carefully -- planned routes to designated triage areas where others wrapped and crated them, then nailed the crates shut, sealed them and applied more colored priority stickers. The tasks were all the more difficult after dark since workers had only the dim light of small portable lamps, a precaution in case of a bombing raid.

"By 1 a.m., all fifty or so of the most prestigious paintings considered readily movable had been moved to the triage areas. Workers then rushed back to the galleries to begin the next round. The atmosphere was frenzied, but the packing went smoothly; every part of the endeavor had been analyzed again and again over multiple years and then rehearsed.

"With the military draft underway, it had been a mad scramble ... to assemble the small army of people needed for the massive operation. ... Among those helping out were dozens of men on loan from several of the big Parisian department stores, including the Samaritaine, whose owner, Gabriel Cognacq, was vice president of the National Museum Council. At one point, young staff member Magdeleine Hours walked into a gallery to find men from one of the department stores packing up fourteenth -- and fifteenth-century paintings. like the other workers, they were dressed in long work smocks, but they also wore mauve tights and striped caps. Hours was stupefied; they looked to her just like characters in the medieval works they were packing.

"In the triage areas, antiquities were packed in protective material. Smaller paintings were wrapped first in fire-resistant paper, then in leatherette to resist humidity: fiber spacers separated multiple paintings packed in a single crate. Dust swirled in the air and hammers clattered as typists furiously tapped out quintuplicate lists of the contents of each crate. To disguise the contents of crates, they bore only three markings: the initials 'MN,' the department initials and a crate number; the anonymity was intended to discourage theft and to frustrate searches by Germans. Moreover, to keep unauthorized individuals from knowing where the items were going, all shipping labels said Chambord, even though many items had already been assigned to other final destinations in the Loire Valley. ...

"[A]fter two days of around-the-clock packing ... empty trucks began rolling into the courtyard. ... At 6 a.m. on August 28, 1939, the first convoy of eight trucks, loaded with the Mona Lisa, the Seated Scribe, the crown jewels, and 225 other crates of some of the world's most precious art and antiquities rolled slowly away from Paris towards the French countryside. "