Today's encore selection -- from River of Doubt by Candice Millard. The Amazon river has three thousand species of fish -- some as strange as any on earth -- compared to only 375 for the Mississippi and Missouri rivers combined. The most feared is not the piranha but the tiny candiru:

"The Amazon river system is a prodigy of speciation and diversity, serving as home to more than three thousand species of freshwater fishes -- more than any other river system on earth. Its waters are crowded with creatures of nearly every size, shape, and evolutionary adaptation, from tiny neon tetras to thousand-pound manatees to pink freshwater boto dolphins to stingrays to armor-plated catfishes to bullsharks. By comparison, the entire Missouri and Mississippi river system that drains much of North America has only about 375 fish species. ...

"Certain Amazonian fish, such as the tambaqui, have evolved teeth that look like sheep molars and are tough enough to crack open even the hard, cannonball-sized shell of the Brazil nut. The ancient, eellike South American lungfish has lungs as well as gills. Unless it surfaces every four to ten minutes for a gulp of air, it will drown. During the dry season, however, while other fishes around it die as the ponds and streams dry up, the lungfish survives by burrowing into the mud and taking oxygen from the air. Still another species, the so-called four-eyed-fish, has eyes that are divided in two at the waterline by a band of tissue. With two separate sets of corneas and retinas, the fish can search for predators in the sky above and at the same time look for danger in the water below. ... 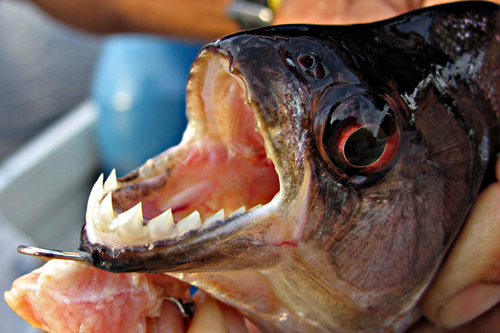 "The fish that inspired the greatest fear among the men was the piranha. Attracted by blood and drawn to the kind of commotion that a bathing man might make, piranha have been known to swim in groups of more than a hundred, spreading out to scout for prey and then alerting the others, probably by sound, when they find it. Of the approximately twenty piranha species, most prefer to attack something their own size or smaller, and they are happy to scavenge, especially during the rainy season, when there is more to choose from. However, their muscular jaws and sawlike teeth, which look as if they have been filed to tiny spear points, can make quick work of a living creature of any size and strength, from a waterbird to a monkey to even an ox.

"As terrifying as the piranha were, many of those who lived in the settled areas of the Amazon would have preferred them to the tiny, almost transparent catfish known as the candiru. This sharp-spined fish is the only other animal besides the vampire bat that is known to survive solely on blood. Most species of candiru are only about an inch long, and they usually make their living by swimming into the gill chambers of larger fish. To other fish, the candiru is relatively harmless, because, when full to capacity, it simply swims back out of the gill chamber and burrows into a riverbed to digest its blood meal. To humans, however, the miniature catfish is a potentially lethal menace. When it comes to parasitizing people, a very rare occurrence, the candiru's modus operandi is to enter through an orifice."