Today's selection -- from The Kentucky Mint Julep by Colonel Joe Nickell. In the waning days of summer, we take a moment to ponder the etymology of the word julep and the crushing and bruising of the common English garden mint:

"The use of the word julep dates to ancient times. The term appears to derive from the Persian gulab, meaning 'rosewater.' In Arabic the word is julab; in Medieval Latin julapium; in Spanish and Portuguese julepe. Julep is French. The Oxford English Dictionary records the use of the word as early as 1400 A.D. to refer to a syrup that was typically used as a vehicle for medicine. In his pioneering lexicon, A Dictionary of the English Language (1755), Dr. Samuel Johnson defines julap [sic] as an 'extemporaneous form of medicine, made of simple and compound water sweetened, serving for a vehicle to other forms not so convenient to take alone.' Long before Mary Poppins sang about a spoonful of sugar making the medicine go down, people used syrup to make bitter or otherwise disagreeable potions more palatable.

"The julep as a drink was once taken as a form of cordial, a stimulating and invigorating medicine or beverage. Poet John Milton (1608-1674) described the beauty and scent of one such concoction in his poem Comus.

... this cordial julep her,
That flames and dances in his crystal bounds,
With spirits of balm and fragrant syrups mix'd. (6, 2) 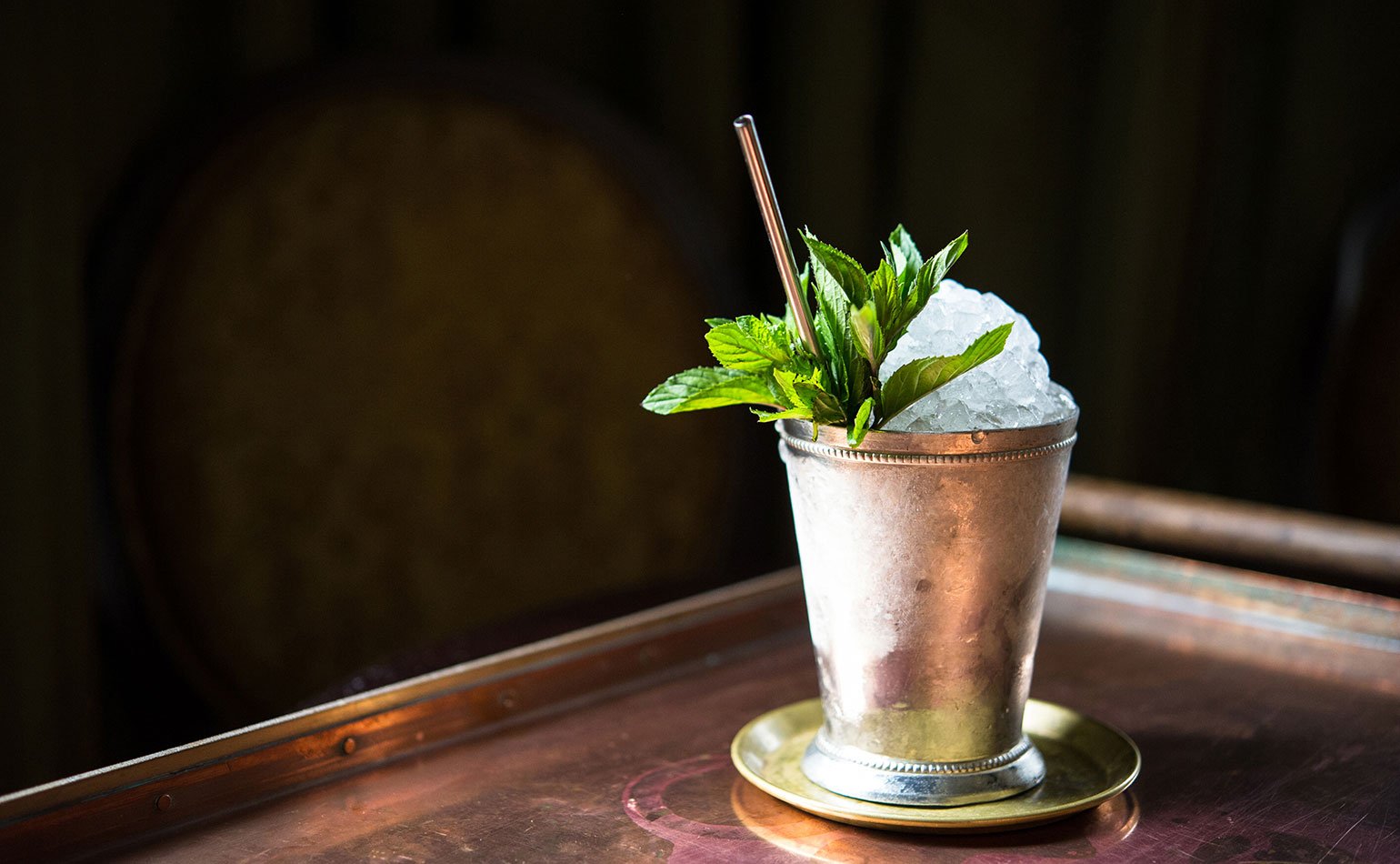 "Diarist Samuel Pepys (1633-1703) evidently found julep worth some physical exertion. He wrote that on June 22, 1660, he proceeded 'thence to my Lord's and had the great walk to Brigham's, who gave me a case of good julep.'

"From its humble beginnings as a medicinal base, the julep emerged as a standard whiskey drink. The two uses, however, may have been similar in the beginning. One theorist suggests that 'the first mint juleps could easily have been made to mask the flavor of a rough whiskey before the bourbon distillers, as we know them, had honed their craft.' British traveler and Virginia plantation tutor John Davis mentioned the drink in his 1803 Travels of Four Years and a Half in the United States, speaking of a 'dram of spirituous liquor that has mint in it, taken by Virginians of a morning.'

"The mint transformed the julep, according to one authority, into 'our own American invention.' Adding mint was a logical and successful step. 'Of all the compatibles man has discovered in the world of food and drink,' writes Gerald Carson, 'none excels the harmony with which mint blends into a silver goblet filled with ice, a dusting of sugar and several ounce of mellow bourbon.'

"The mint used in juleps is common English garden mint, Mentha spicata, or spearmint, which is also used for making candy, tea, and jelly. The plant is also said to have many medicinal properties, including the ability to settle a queasy stomach, increase appetite, sweeten the breath, relieve the sting of an insect bite, and cure chapped skin. The tiny spikes of flowers are said to attract beneficial insects to gardens, and the leaves are used to repel rodents. Pliny wrote that 'the smell of Mint does stir up the Minde.'

"The single greatest debate involving the mint julep is over whether to crush the mint leaves or not. According to one writer (perhaps with hyperbole), 'Duels have been fought over this question.' One late-nineteenth-century authority said that the matter depends on the strength of the mint, but he stipulated that the leaves should be crushed and allowed to stand before the bourbon was added.

"In contrast is the opinion of the author of a southern cookbook, who gives a reason for her opposition to crushing the leaves: Doing so 'releases the bitter, inner juices.' Therefore, this source advises readers to 'bruise the mint gently with a muddler and blend the ingredients by stirring and pressing gently for several minutes. The notion that the mint is 'only for bouquet' -- as one mixologist suggests -- defies tradition and logic."