Today's selection -- from The Thing With Feathers by Noah Strycker. The incredible navigation powers of birds:

"Just before World War II, a Welsh ornithologist, Ronald Lockley, captured two Manx shearwaters, a type of streamlined seabird, on Wales's Skokholm Island, and flew with them by airplane to Venice to try an experiment. On arrival, Lockley walked to the nearest Italian beach and released his two birds. He wondered whether he'd ever see them again.

"Fourteen days later, one of them turned up back in its burrow on Skokholm Island, not long after Lockley himself had returned to his home there. He was shocked. The black-and-white, football-sized seabird had traveled more than 930 miles, averaging at least 65 miles per day over mountainous terrain entirely unfamiliar to its kind. Manx shearwaters of this subspecies spend nearly their entire lives at sea, dine exclusively on fish and other marine creatures, and don't normally inhabit the Mediterranean region at all; they reach land only to nest on rugged islands like Skokholm along the fringes of the wild northern Atlantic. A water route from Venice to Skokholm would have required a circuitous 3,700-mile passage southeast around the tip of Italy, westward past Spain and through the Strait of Gibraltar, and northward past Portugal and France, but this bird had apparently taken a more direct flight. Upon release, instead of heading for the open Mediterranean, it oriented in the opposite direction and disappeared inland, toward the Italian Alps -- and, eventually, arrived home in Wales. Just as though it had a map and a compass. ...

"After the Venice test, he looked for an opportunity to send one even farther afield. A couple of birds packed by steamship to America did not survive the trip in good enough health to return, but when the American clarinetist Rosario Mazzeo visited Skokholm after the war ended, Lockley seized another chance. He convinced his friend to bring two shearwaters home on the plane, to be released in Boston. 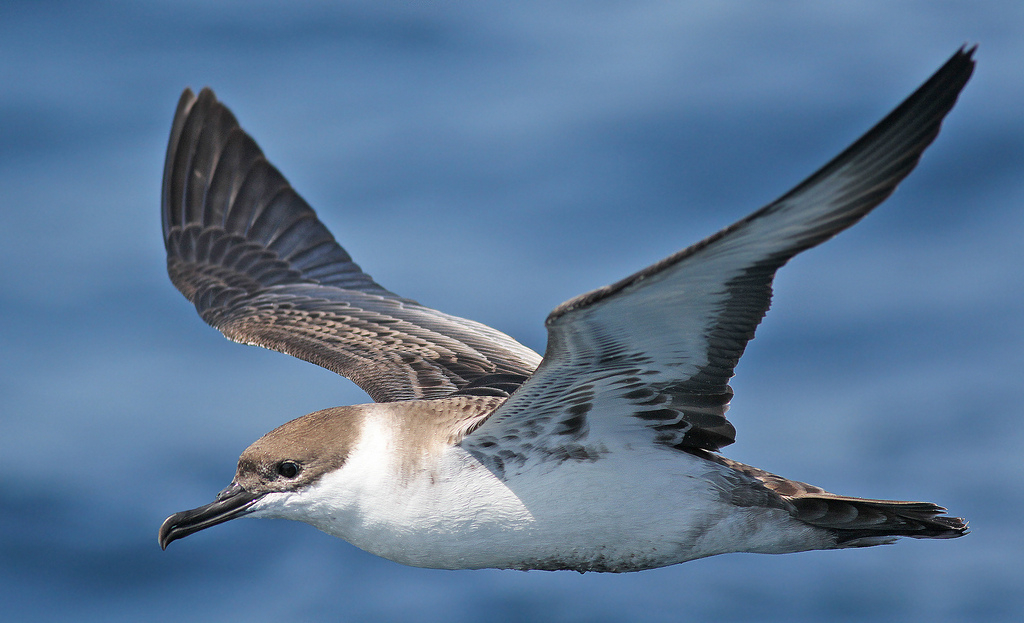 "Mazzeo's own journey began with an overnight sleeper train from Wales to London. His little carton containing the pair of shearwaters, he later reported, 'caused no little wonder and merriment to the people in the adjoining rooms, who could not understand the origin of the mewing and cackling sounds which came from my room in the late evening.' The next morning he took a long flight to the United States with the birds tucked under his seat -- a trip that would be nearly impossible in today's security age. Only one survived. Mazzeo was met by an airline employee, who escorted him in an official truck to the easternmost edge of Logan International Airport, where they carefully opened the carton and watched its remaining occupant stretch its wings, flutter into the air, and glide away toward Boston Harbor. When the shearwater reached the shore, it abruptly turned east and knifed toward the open Atlantic, where 3,200 miles of ocean separated it from home.

"Twelve days, twelve hours, and thirty-one minutes later, Lockley found the shearwater, number AX6587, back in its burrow on Skokholm Island. The seabird had averaged 250 miles per day over the trackless Atlantic for nearly two weeks straight. Mazzeo received a triumphant telegram addressed to Symphony Hall in Boston but didn't get the full story until Lockley worked out the details. When the bird showed up at Skokholm so soon, Lockley was convinced that something had gone wrong; he figured Mazzeo had preemptively freed his shearwater in London. In fact, the friendly clarinetist had mailed a letter from Boston immediately after releasing his charge, but the bird outpaced even the postal service. Only when Mazzeo's letter arrived in Wales, a day after the shearwater, did Lockley realize the incredible trip the bird had taken from America back to its nest in Europe. ...

"To be able to find their way home from an unfamiliar place, birds must carry a figurative map and compass in their brains. The map tells them where they are, and the compass tells them which direction to fly, even when they are released with no frame of reference to their loft.

"Researchers have gone to great lengths to confirm that pigeons don't merely memorize their outward trip. In one experiment, birds were transported in sealed containers filled with purified air, mounted on tilting turntables between coils that varied the magnetic field, and exposed to loud noises and flashes of light, so that, unlike a blindfolded person in the backseat of a taxi who might remember the twists and turns of the journey, they had no external cues. In another study, pigeons were anesthetized and unconscious during the outward trip. They still made it home, proving the existence of an intrinsic map and compass system."