Today's selection -- from The Gesualdo Hex by Glenn Watkins. Carlo Gesualdo da Venose, the Prince of Venosa, was an Italian nobleman and composer in the 16th century. He is famous not only for the haunting madrigals he composed, but the vicious murder of his wife, Maria d'Avalos, and her lover, Fabrizio Carafa, the Duke of Andria. The double-murder, which contributed to Gesualdo's notoriety, was never punished. In fact, there was an imperative to murder an adultering wife and her lover:

"Details of the ensuing murder of Maria D'Avalos were reported at the time by the inquest of the Grand Court of the Viceroy, and this much is clear from witnesses to the murder: under the announced pretext that he had gone hunting, Gesualdo provided an all-clear signal to Maria and the Duke of Andria to meet in their residence, the Palazzo San Severo, for a sexual liaison; having laid the trap, Gesualdo then attacked the couple with a party of servants and murdered them in their bed. ... There were verifiable first-hand reports of Gesualdo's command to 'Kill that scoundrel along with this harlot! Shall a Gesualdo be made a cuckold?'; descriptions of nightshirts bloodied, of throats slit, of bodies stabbed in private parts; and of Gesualdo's exit from the bedchambers, his hands covered with blood, only to return a second time to stab his wife, muttering, 'I believe she may not yet be dead.' 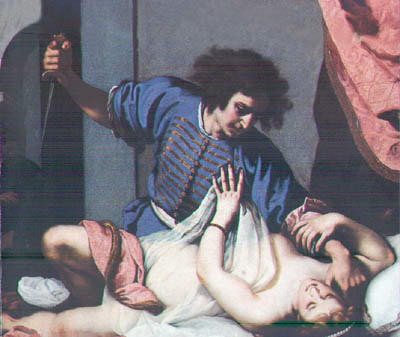 the murder of Maria d'Avalos and her lover

"The reality [is] that women in late-Renaissance Italy were not allowed amorous dalliances. Spanish convention, which would have included Naples, inclined to the killing of both the adulteress and her lover, the northern Italian tradition to killing only the wife. Thus custom held that a cuckolded male, and particularly a Neapolitan prince, had not only the right but the duty to protect the honor of the family name by murdering the guilty parties. ...

"Given the culture of the day, it is not surprising that other similar examples abound among illustrious personages, including musicians. It has been corroborated, for example, that in November of 1601 Alfonso Fontanelli, an Este courtier and esteemed composer who had earlier accompanied Gesualdo to Ferrara for his second marriage to Eleonora d'Este in 1594, was stripped of his property following the murder of his wife's lover and was then banned from Este territory. As we have seen, Fontanelli had good models by that time in the figures of both Gesualdo and Duke Alfonso d'Este II. Yet the very next year Fontanelli found employ in Rome in the service of Cardinal Alessandro d'Este, the brother of Cesare and Eleonora d'Este. His record as murderer was finally put aside when, through the influence of friends, Fontanelli returned to the favor of Duke Cesare, who in 1605 appointed him as official resident in the papal court.

"A similar story and ultimate disposition can be found with Francesco Rasi, a composer and renowned singer in the employ of Gesualdo in 1594, who, following his implication in a murder in 1610, was banned from Tuscany and dispatched to Turin, 'where he took part in a restaging of Monteverdi's Orfeo.' Almost one hundred years earlier another Italian composer, Bartolomeo Tromboncino, had killed his wife, Antonia, after discovering her with her lover. Pardoned, he went on to a brilliant career. To put it bluntly and briefly: in Gesualdo's time there existed a social imperative of murder hinged to the issue of uxorial infidelity and family honor. "