Today's selection -- from Wilson by A. Scott Berg. In 1917, England and France were locked in a stalemated, bloody trench war with Germany -- the bloodiest war in world history to that point. Then the American troops joined the Allies and turned stalemate into victory. In December, 1918, with the war now over, President Woodrow Wilson traveled by ocean liner to France, landing in Brest, to help negotiate the peace treaty. He was met in Paris by "the most massive display of acclamation and affection ever heaped upon a single human being -- sheer numbers alone making it the greatest march of triumph the world had ever known":

"A procession of motorcars transported [President Woodrow Wilson] through the medieval streets [of Brest] -- festooned with laurel wreaths and banners -- past the largest crowd ever amassed in the picturesque city. .... But nothing, not even those advance welcomes, could have prepared the President for what awaited him in Paris.

"Under brilliant skies, the train arrived precisely at ten o'clock at the private station in the Bois de Boulogne, a terminal reserved for visiting dignitaries of royal blood. The building's walls and pillars were draped in red, white, and blue, and, high above, from a pair of staffs, waved a huge Star-Spangled Banner and a Tricolore. President Raymond Poincare, Premier Georges Clemenceau, and all the leadership of the French government, along with members of the American Embassy, greeted the Wilsons as they stepped off the train onto a crimson carpet. Bands played as the dignitaries entered a magnificent reception room fragrant from profusions of roses and carnations. After a few speeches of welcome, the two presidents led the procession outside, where eight horse-drawn carriages, each attended by coachmen and footmen in national livery, awaited. On the roadway above the station and on nearby rooftops and windows, thousands of admirers cheered wildly as they entered the first open victoria. The Presidents' wives and Margaret Wilson entered the second carriage, followed by Clemenceau and the rest of the party, in hierarchical order. The Garde Republicaine, on horseback and wearing shimmering brass helmets with long black horsetails down the back, led the cavalcade along a fourmile route to the Wilsons' Paris lodgings. 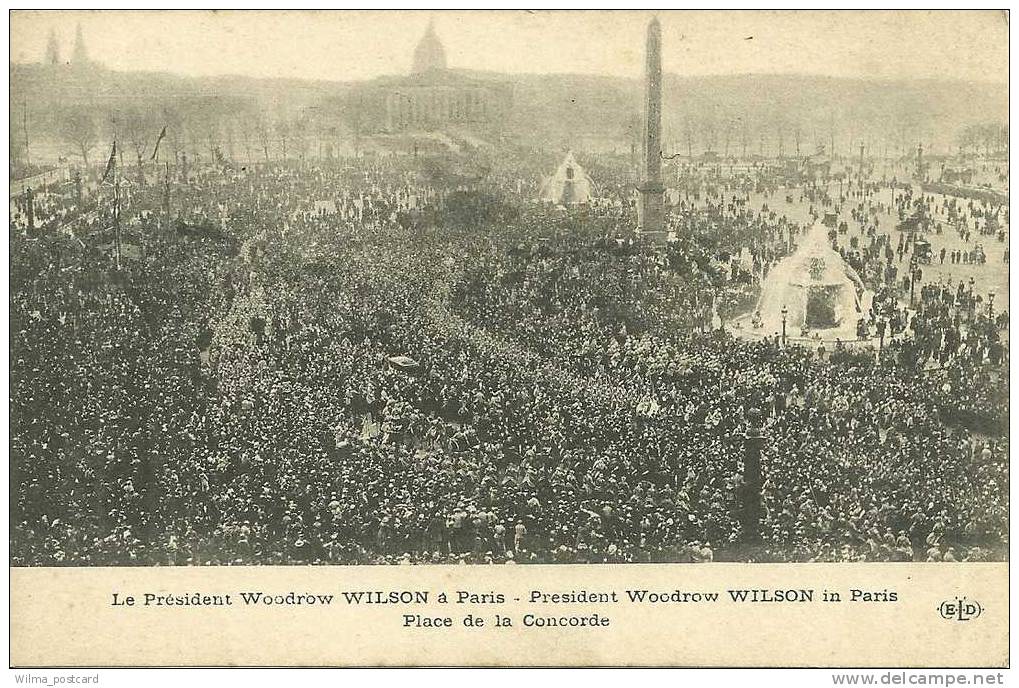 " 'The cheering had a note of welcome in it,' observed Admiral Grayson, 'and it required the best efforts of the troops to prevent some of the over-enthusiastic breaking through and overwhelming the Presidential party.' Irwin Hood 'Ike' Hoover, the chief usher of the White House, said that behind the soldiers from many countries who lined the streets, 'as far as the eye could see was one writhing, milling mass of humanity. They did not applaud; they screamed, yelled, laughed, and even cried.' Sixty-eight-year-old diplomat Henry White, the lone Republican member of the American negotiating committee, said he had witnessed every important coronation or official greeting in Europe for fifty years and had never seen anything like it. Reporters claimed the crowds were ten times those that had recently assembled for the visiting monarchs of England and Belgium.

"Reaching the Etoile, Wilson received a historic honor: the chains encircling the Arc de Triomphe had been removed, thus granting him the passage that had not been allowed to anybody since the end of the Franco-Prussian War in 1871, and only to Napoleon before that. Down the broad Champs-Elysees they rode, the crowds thickening. As Edith Wilson observed, 'Every inch was covered with cheering, shouting humanity. The sidewalks, the buildings, even the stately horse-chestnut trees were peopled with men and boys perched like sparrows in their very tops. Roofs were filled, windows overflowed until one grew giddy trying to greet the bursts of welcome that came like the surging of untamed waters. Flowers rained upon us until we were nearly buried.' More than an expression of gratitude from one nation to another, the demonstration grew personal.

"They crossed the Seine at the Alexandre III Bridge to the Quai d'Orsay and then recrossed to the Place de la Concorde, into which 100,000 people had jammed, hoping for a glimpse of 'Meester Veelson.' The noise grew deafening, as the carriages proceeded through the Rue Royale, and the crowd kept roaring the phrase posted overhead in electric lights on a sign that spanned the street -- 'VIVE WILSON.' President Poincare declared that the reception 'stood alone among the welcome given any previous visitor to Paris.'

"The wartime population of central Paris was a little over one million citizens, and newspapers estimated that two million people filled just the handful of arrondissements along President Wilson's route. Forgetting neither Alexander nor Caesar, not even Napoleon, France offered that day the most massive display of acclamation and affection ever heaped upon a single human being -- sheer numbers alone making it the greatest march of triumph the world had ever known. To those who had just endured an apocalypse, observed future President Herbert Hoover -- then in Europe to supervise the feeding of the hungry -- 'no such man of moral and political power and no such an evangel of peace had appeared since Christ preached the Sermon on the Mount. Everywhere men believed that a new era had come to all mankind. It was the star of Bethlehem rising again.' Wilson gloried in the reception."