Today's selection -- from Rebellion by Peter Ackroyd. Though glimmerings of the scientific age came before him, Francis Bacon can be said to have truly announced that new age in 1605 with the publication of his book The Advancement of Learning. Prior to that time, men of learning had relied on the writings of the esteemed philosophers of the past more than their own direct observations. For example, men believed that a heavier object fell faster than a lighter one because Aristotle had written so. Then Galileo leaned out of the Leaning Tower of Pisa (according to Viviani), dropped two balls of different weight, and disproved Aristotle's theory. In his book, Bacon charged that "men have withdrawn themselves too much from the contemplation of nature, and the observations of experience, and have tumbled up and down in their own reasons and conceits": 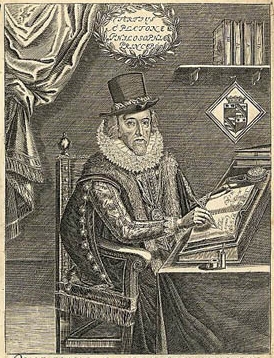 "In 1605 one of the king's 'learned counsel' presented him with a treatise that summoned up the spirit of a new age. Francis Bacon's 'Of the Proficience and Advancement of Learning Divine and Human' is better known to posterity as The Advancement of Learning; it can justifiably be said to have changed the terms of human understanding and the nature of knowledge. Bacon had been a royal servant for some years under the patronage of his uncle, Lord Burghley, and had been first enlisted in the court of Elizabeth. But the advent of a new king promised more tangible rewards and, soon after the accession, Bacon provided James with texts of advice on such matters as the union of Scotland with England and ecclesiastical polity.

"Yet The Advancement of Learning was a work in quite another key, and one that helped to create the climate of scientific rationalism that characterized the entire seventeenth century. Bacon had first to clear away the clutter of inherited knowledge. In the early pages of the treatise 'the first distemper of learning' is denounced as that by which 'men study words and not matter'. Yet words, and not matter, had been the foundation of traditional learning for innumerable centuries, whether in the rhetorical humanism of the Renaissance or in the scholastic theology of the Middle Ages. Bacon declared, however, that 'men have withdrawn themselves too much from the contemplation of nature, and the observations of experience, and have tumbled up and down in their own reasons and conceits'. It was time to look at the world.

"He further observed that:

this kind of degenerate learning did chiefly reign amongst the schoolmen, who having sharp and strong wits, and abundance of leisure, and small variety of reading, but their wits being shut up in the cells of a few authors (chiefly Aristotle their dictator) as their persons were shut up in the cells of monasteries and colleges, and knowing little history, either of nature or of time, did out of no great quantity of matter, and infinite agitation of wit, spin out unto us those laborious webs of learning which are extant in their books ... cobwebs of learning admirable for the fineness of thread and work, but of no substance or profit.

"The clarity and cogency of his prose are the perfect instruments for his attack upon the ornateness and excessive ingenuity of the old learning. That is why Shelley cited Plato and Bacon as the two most influential of all the poet-philosophers.

"Bacon was assaulting the methods and principles of previous human learning in favour of experiment and observation, which he believed to be central to true natural science. He was suggesting that the scholars and experimenters of the time should confine themselves 'to use and not to ostentation' and to 'matters of common sense and experience'. He warned that 'the more you remove yourselves from particulars, the greater peril of error you do incur'. At a later date this would be described as the 'scientific' disposition.

"The purpose of all learning was, for Bacon, to promote the benefit and prosperity of humankind. The material world is to be understood and mastered by means of 'the laborious and sober inquiry of truth' which can be pursued only by 'ascending from experiments to the invention of causes, and descending from causes to the invention of new experiments'. This was a revolutionary statement of intent that places Bacon, and the Jacobean period, at the opening of the modem age.

"Bacon desired an institutional, as well as an epistemological, change; he suggested that universities, colleges and schools be directed 'by amplitude of reward, by soundness of direction, and by the conjunction of labours'. We may see here the origin of the attitude that was to guide the Royal Society and to inform the inventive energies that emerged in the first years of the Industrial Revolution. Bacon himself was of a puritan disposition. He believed in the power of individual agency above the manifold allures of tradition and authority; he believed in observation rather than contemplation as the true instrument of practical reason. The beacons of utility and progress were always before him.

"Bacon hoped that by their bright light 'this third period of time will far surpass that of the Grecian and Roman learning'. It would be fair to say that he helped to change the pace and the direction of that new learning. He entitled a later work Instauratio Magna, 'the great innovation' or foundation; the frontispiece of that book shows a ship sailing through the two Pillars of Hercules that traditionally signified the limits of knowledge as well as of exploration. It is an emblem of a journey of discovery in defiance of the motto 'nee plus ultra', nothing further beyond. The reign of James I, therefore, can be said to mark the beginning of a voyage through strange seas of thought."