Today's selection -- from A Short History of Charleston by Robert Rosen. The story of George and Ira Gershwin's opera Porgy and Bess:

"Porgy and Bess: Charleston began to glorify its past, its present, its people, and its places. 'Local  color' became Charleston's stock-in­trade in the arts, in literature, and in song. That local color was very deep and very colorful indeed, for it produced nothing less than the most famous American opera ever written, Porgy and Bess.

"The story of the opera begins with DuBose Heyward, a descendant of rice planters and an insurance salesman living on Church Street in Charleston during the 1920s. Heyward was taken with a way of life he could only glimpse: that of the poor blacks of Charleston. He said of himself later: 'I think without realizing it, I started to write "Porgy" when as an employee of a cotton warehouse on the Charleston waterfront, I first came into close contact with the negro life of the city. I was young and impressionable, and the drama that was enacted before me moved me profoundly .... '

"Heyward was well acquainted with a local crippled black beggar named Goat Sammy who for many years sat begging in his goat cart at the corner of King and Broad. Goat Sammy's real name was Samuel Smalls. One day in March 1924, Heyward picked up the News and Courier and read a story under the headline 'Busy Time for Police.' It read as follows: 'Samuel Smalls was arrested, charged with shooting at Maggie Barnes on premises at 4 Romney Street. His markmanship, however, being poor, the Barnes woman escaping [sic] unhurt.'

"Smalls was arrested on March 24, 1924. The assault occurred at 4 Johnson Court, Romney Street, near Smalls's real residence in Green Tene­ment near Mt. Pleasant Street. The 'real' Porgy languished in jail until the charges were dismissed on June 3.

"But Smalls's passion electrified Heyward. Here was a pitiful beggar who had real man-sized feelings. 'To Smalls I make acknowledgement of my obligation,' Heyward wrote in the introduction of his play. 'From contem­plation of his real, and deeply moving, tragedy sprang Porgy, a creature of my imagination ... and upon whom ... I could impose my own white man's conception of a summer of aspiration, devotion, and heartbreak across the colour wall.'

"The rest is a part of American cultural history. Heyward gave up his work to write. He went to the MacDowell colony in New Hampshire where he wrote Porgy. The novel was published in 1925 and set in Charleston 'in the 1920's in the Golden Age. Not the Golden Age of a remote and legendary past ... but an age when men, not yet old, were boys in an ancient, beautiful city that time had forgotten before it destroyed.' It was the story of a black beggar named Porgy; Bess, his woman; Crown his rival; and Sportin' Life and others who inhabit Catfish Row, the poor black Charlestonians of the 1920s.

"The novel was a great success. Dorothy Heyward, Heyward's wife, wrote a script for a play, and, despite Heyward's doubts that a play could be successfully produced with such a large black cast, even in New York, Porgy was produced by the Theatre Guild on Broadway.

"Before the play was ever written, George Gershwin expressed an interest in writing an opera based on the novel. Gershwin had already made his mark, having written Rhapsody in Blue and a number of Broadway musicals. He came to Charleston in the summer of 1934 and stayed on Folly Island. For months he and Heyward roamed the sea islands around Charleston, going to black churches, listening to gospel music, and to 'shouts.' Heyward recalled later: 'I shall never forget the night when, at a Negro meeting on a remote sea-­island, George started 'shouting' with them, and eventually to their huge delight stole the show from their champion 'shouter.' I think that he is probably the only white man in America who could have done it.'

"And what happened to Goat Sammy? We shall never know for sure. He disappeared from Charleston, never knowing that the character Porgy was based on him. A few years after Porgy had become successful, people in Charleston began to refer to the missing Smalls as 'Porgy.' Some insisted that Porgy was his real name. A number of prominent Charlestonians started looking for Smalls (including Mayor Stoney, who sent the City Police out!). Two patient investigators, Police Chief Healy and Henry Church finally found a grave -- which no one has been able to find since the 1920s -- on James Island. Apparently Smalls had a wife on the island. Her name was not Bess. It was Normie.

"According to Dorothy Heyward's account in the News and Courier, Normie said that 'De ole goat follow' Sammy ... very close. He ain't eat nuttin' aftuh Sammy gone. Dere nuttin' we can do. He jus' grieve an' die. He want to be wid' Sammy.' And according to Normie (through Dorothy Heyward), Sammy shot Maggie Barnes because she stole his watch, not out of jealousy. But, then, that's what Sammy told his wife.

"In 1911, another terrible hurricane hit the Low Country and finished off the rice growing industry which had flourished since colonial times. It had winds of 105 m.p.h. and left seven dead. Ironically, it was this 1911 hurricane which DuBose Heyward had described in the novel Porgy. An entire chapter (Part V) is devoted to a hurricane in Charleston. It began, as they all do, in September. The church bells clanged twenty times, the signal for a hurricane. 'At its first stroke, life in Catfish Row was paralyzed,' Heyward wrote. A blue flag was raised over the Customs House. 'And now from the opaque surface of the screen came a persistent roar that was neither wind or water, but the articulate cry of the storm itself,' Porgy continued. 'The buildings huddled closer and waited. Then it crossed the strip and smote the city.'

"The hurricane of 1911 was immortalized in the words and music of George Gershwin. After the great storm scene the sheet music for Porgy and Bess reads as follows: '(Clara is at window looking through crack in the shutter. She holds baby as she sings); Clara (with great feeling): "One of these mornings you goin' to rise up singin', Den you'll spread yo' wings an' you'll take to de sky .... "' Thus, the most famous song of America's most famous opera is about the feelings of Charleston's survivors of a great hurricane.

"Neither Porgy nor Porgy and Bess played in Charleston in the 1920s or 1930s. Nor did they play in the 40s, 50s, or 60s. The reason was segregation. The black community would not participate in producing a play about black Charlestonians and watch it in a segregated theatre.

"In 1954, an attempt was made to produce Porgy locally. Parts were cast, and a theater was secured, but the seating arrangements could not be agreed upon. The leaders of the black community, Arthur Clement and Mrs. R. L. Fields, indicated that local black actors would not play to a segregated hall. Porgy was cancelled." 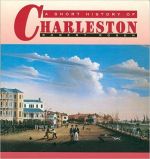