Today's selection -- from The Tiger: A True Story of Vengeance and Survival by John Vaillant. In the far eastern edge of Russia, near the Sea of Japan, lies the taiga, one of the most unexpected ecosystems in the world. Winter can bring blizzards and temperatures 50 degrees below zero, and summer will answer with typhoons and monsoons and heat waves of 100 degrees. Here, timber wolves and reindeer share terrain with spoonbills and poisonous snakes, and there are insects on a scale hard to imagine. In the taiga, the Amur (Siberian) tiger, the largest of all the world's cats, reigns supreme. These tigers, because they are so rare and so valuable, have been particularly hard hit by poachers: Their organs, blood, and bones are much sought after for use in tradi­tional Chinese medicine. After the fall of the Soviet Union, "between 1992 and 1994, approximately one hundred tigers -- roughly one quarter of the country's wild population -- were killed. Most of them ended up in China":

"Of the six surviving subspecies of tiger, the Amur is the only one habituated to arctic conditions. In addition to having a larger skull than other subspecies, it carries more fat and a heavier coat, and these give it a rugged, primitive burliness that is missing from its sleeker tropical cousins. The thickly maned head can be as broad as a man's chest and shoulders, and winter paw prints are described using hats and pot lids for comparison. As the encyclope­dic reference Mammals of the Soviet Union puts it, 'The general appearance of the tiger is that of a huge physical force and quiet confidence, combined with a rather heavy grace.' But one could just as easily say: this is what you get when you pair the agility and appetites of a cat with the mass of an industrial refrigerator. 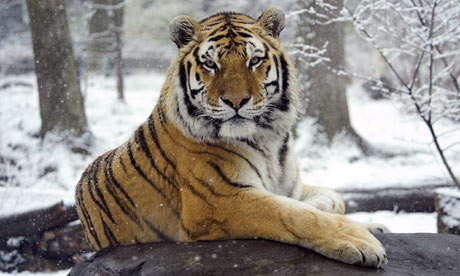 "To properly appreciate such an animal, it is most instructive to start at the beginning: picture the grotesquely muscled head of a pit bull and then imagine how it might look if the pit bull weighed a quarter of a ton. Add to this fangs the length of a finger backed up by rows of slicing teeth capable of cutting through the heaviest bone. Consider then the claws: a hybrid of meat hook and stiletto that can attain four inches along the outer curve, a length comparable to the talons on a velociraptor. Now, imagine the vehi­cle for all of this: nine feet or more from nose to tail, and three and a half feet high at the shoulder. Finally, emblazon this beast with a primordial calligraphy: black brushstrokes on a field of russet and cream, and wonder at our strange fortune to coexist with such a creature. (The tiger is, literally, tattooed: if you were to shave one bald, its stripes would still be visible, integral to its skin.) Able to swim for miles and kill an animal many times its size, the tiger also possesses the brute strength to drag an awkward, thousand-pound carcass through the forest for fifty or a hundred yards before consuming it.

"A tiger may greet a mate or a cub with a gentle nuzzle, but it meets its prey paws-first. The tiger's forepaws differ from the hind ones in that they are larger with five claws arranged in an almost handlike spread. By contrast, the hind paws have only four claws. In addition to walking, running, and climbing, the forepaws can serve as twin maces, enabling a tiger to club its prey to death. And yet, they are also gentle and dextrous enough to catch a fly in the fold of a pad and release it, unharmed. Tigers tend to attack from the rear or the side, giving them the advantage of surprise, but they fight head-on, often rearing up on their hind legs. In this stance, with ears laid flat against a bull-necked head, a fighting tiger bears a startling resemblance to a fighting man, specifically a heavyweight boxer. Surprisingly delicate hind legs give way to slender hips and waist, which then swell dramatically into a deep chest hung with massively proportioned 'arms' that flex much as ours do as they jab and parry.

"Unlike wolf or bear claws, which are designed primarily for traction and digging, a cat's claw is needle-sharp at the end, and bladed along a portion of its inside length. With the exception of a snake's fang, it is about as close to a surgical tool as one can find in nature. When extended, the claws of the forepaw become slash­ing blades with the result that the victim is not so much sliced as flayed. But this is almost incidental to the forepaws' most impor­tant purpose, which is to plant a pair of virtually unshakable anchors in an animal's flesh. Once the forepaws are fully engaged, a tiger can literally ride its prey into the ground.

"In the final nanoseconds of an airborne attack, a tiger's tail will become rigid, balancing and stabilizing the hindquarters almost like the tail fin on an airplane. Meanwhile, the tiger's forepaws, combined with its fangs, form a huge three-point grap­pling device, as if, for a moment, the claws had become extensions of the jaws. Working together in this way, they can cover an area of a square yard or more to manifest a gathering and gripping capability comparable to the mouth of a much larger creature -- something more on the order of a saltwater crocodile or an allosaurus. ... Once the prey is down, these same assault weapons can become the most delicate scalpels and clamps, able to disembowel an animal, organ by organ.

"For all these reasons, there is no creature in the taiga that is off limits to the tiger; it alone can mete out death at will."