Today's selection -- from The Cat in Ancient Egypt by Jaromir Malek. Even today, cats are held in special regard in Egypt and other parts of northern Africa, as visitors to the region can attest. That standing has a long provenance, as cats were associated with Egypt's great and powerful sun-god, and often appeared, whether as domestic cats or as lions, as guardians of tombs. The most notable example of this is the Great Sphinx guarding the pyramid tomb of King Khafra in Giza:

"In [the Theban tombs of Kenamun] ... there are cats seated in the windows. One may wonder whether this is a straightforward record of a common sight or whether we should look for symbolic connotations. The truth may be somewhere in between. The lion had been from earliest Egyptian history associated with the concept of guardianship, and so representations of these animals or of sphinxes (hybrid forms which combine the lion's body with a human head) are often found in the vicinity of doorways and entrances to temples and palaces. The Great Sphinx which protects the approach to the pyramid of King Khafra (2518 - 2493 BC) at Giza is the best example. It seems quite like­ly that the cats in the entablature of the doorways in Theban tombs may have had a similar function while at the same time reflecting everyday reality. The motif is also known from some small objects of approximately the same date.

"It is because of its connection with the sun-god that the cat appears on some Ramesside stelae from the Theban area.These monuments belong to the sphere of 'personal piety' and most of them were commissioned by fairly ordinary people, often workmen from Deir el-Medina who would have been able to make them themselves or have them manufactured by their comrades. In certain areas of the large temples of the main national gods, particularly near their entrances, private individuals were allowed to set up small round­-topped slabs of stone, 'stelae'. Small shrines, so-called contra-temples, were sometimes specially made at the back of large sanctuaries for the ordinary populace to worship.

"A stela may contain a representation of the deity to whom it was present­ed, with its donor, perhaps accompanied by other members of his family, shown before it. The texts are usually short hymns in honour of the deity and include personal requests which, however, are never too specific. That the cat is associated with the sun-god is sometimes made clear by the inscriptions. On one such stela, dated to c.1250 BC, there are two rather plump 'hieroglyphic' cats shown in the stela's 'lunette' (the top rounded part). One is called 'perfect (or young) cat (miit nufer) of the god Pra (i.e. Ra, the sun-god)'. The other is 'great (or elder) cat (miit oa), the peaceful one, in his perfect name of Atum, at peace'. Atum was another name of the sun-god and the contrast between the epithets 'perfect (or young)' and 'great (or elder)' is found often in Egyptian texts. There is a curious mixture of grammatical genders in the description of the cats. This need not be significant at all, but it is tempting to regard it as an oblique reference to the sun-god's 'eye' personified by several goddesses, among them Tefnut, Hathor and Mut. These were regarded as his daughters and most of them could take on the form of a lioness, and such an interpreta­tion would associate the cat with the lioness some three hundred years before such a development can be demonstrated for the goddess Bastet. Underneath, the donor is simultaneously addressing the 'great cat' and the sun-god:

Giving praise to the great cat,
kissing the earth before Pra, the great god:
O peaceful one, who returns to peace,
you make me see the darkness of your making.
Lighten me that I can perceive your beauty,
turn towards me,
o beautiful one when at peace,
the peaceful one who knows a return to peace.
May you give life, prosperity, and health
to the ka of. ..

"The space for the name of the donor was left blank, probably because this was a monument made in advance and the name was going to be filled in when a prospective buyer was found." 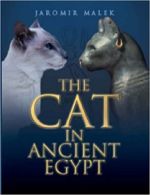