"In recent years, astronomers have continued to study colliding galaxies well enough that they have created a collision theory, which defines certain types of collisions and what is likely to have produced the strange forms we now see. The first and most dramatic type is the so-called head-on collision, akin to two trucks slamming into each other on a freeway. This catastrophic event produces such dramatic objects as the Cartwheel Galaxy, a 'ring galaxy' lying 500 million light ­years away in the constellation Sculptor that appears to consist of a strongly condensed nucleus surrounded by a bright ring of star formation, with little material between the center and the ring. As galactic blows might be classed, this was a direct, head-on smash to the face.

"Fritz Zwicky discovered the Cartwheel Galaxy in 1941, and over the ensuing decades astronomers found many more ring galaxies, although they are comparatively rare. In the 1970s, astronomers using computer modeling explained the basic physics of ring galaxies. They result when an intruder galaxy smacks right into a target galaxy -- one with a large disk containing stars and gas clouds in circular orbits -- along its axis of rotation, falls straight through the disk, and comes out the back end. As collisions go, it's a bull's-eye.

"The Cartwheel Galaxy resulted from a pretty symmetrical, head-on blow. But of course perfect symmetry is rare in the universe, and so a whole range of ringlike galaxies can be produced from galaxies that strike offset from the exact center, and without purely perpendicular velocity. So a numerous range of asymmetrical ring galaxies are left with squished rings, blobby centers, warped arms, and all manner of other oddities.

"One particularly amazing example of a ring galaxy is Hoag's Object, named for the American astronomer Arthur Hoag, who discovered the galaxy in 1950. Lying some 600 million light-years away in the constellation Serpens, this object consists of a nearly perfect ring of young, hot blue stars and gas surrounding an intensely yellowish, compact nucleus. Hoag's Object may be the result of a collision, but no one yet knows for sure. In a perfect collision, the ring forms from a density wave in the galaxy's disk that leads to the ringlike appearance. But in the case of Hoag's Object, there is no sign of the impactor -- the speeding bullet, if the galaxy is a merger, seems to have left the scene. 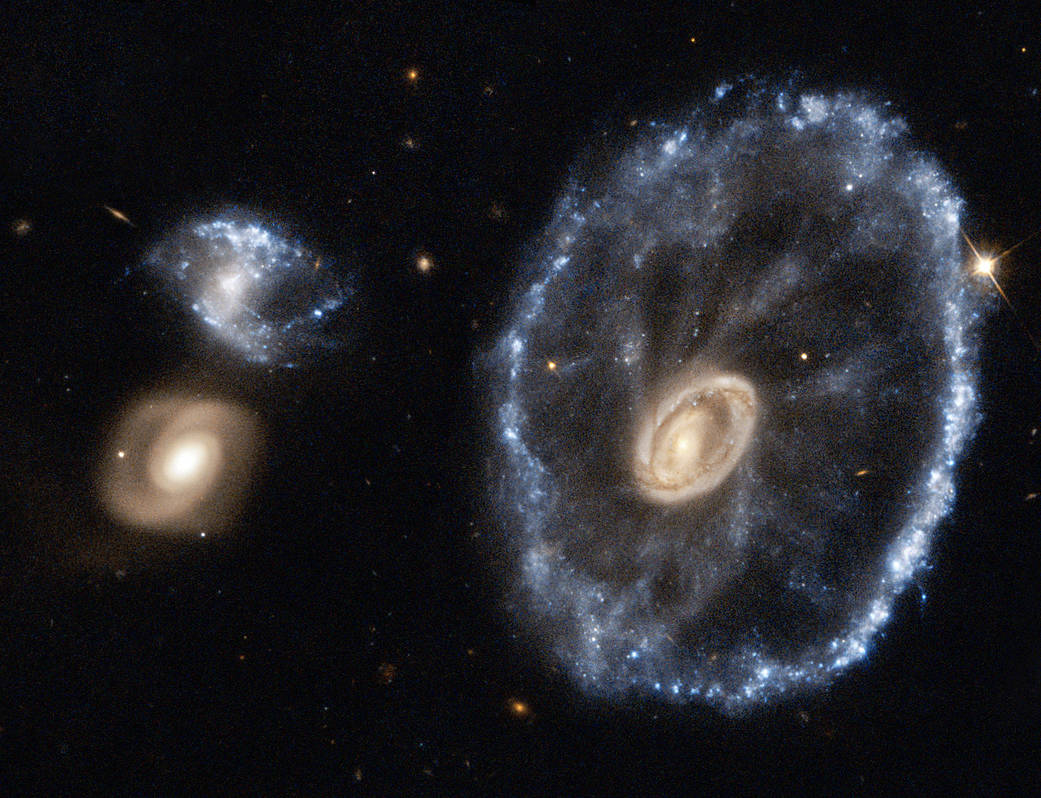 "Other types of ring galaxies do exist, the most intriguing of which are the polar ring galaxies. A good example is NGC 4650A, which shows a ring of material at right angles to a bright, lenticular galactic center. This type of galaxy results from a colli­sion that pulls much of the galaxy's gas out into a new configuration, leading to this odd appearance.

"Although the concept of trekking outside to view and study interacting galaxies is a relatively new one, the realization that galaxies sometimes collided goes back quite some time. Soon after Hubble's discovery of the nature of galaxies, he and several other astronomers began to ponder whether these huge star systems interacted.

"Among the pioneers in the 1920s to think about such things were Harlow Shapley and the Swedish astronomer Bertil Lindblad. Right away, these astronomers and others concentrated on the likeliest places to find galaxies interacting with each other -- the groups and clusters.

"One of the most amazing examples of interaction that backyard astronomers know about in their telescopes is Stephan's Quintet, a group of several galaxies in Pegasus.

"As astronomers have begun to study greater numbers of galaxies, it has become clear that only a small percentage of them are interacting. But these systems, showing dynamical collisions, offer much for astronomers to learn. Roughly half of all galaxies exist in clusters, and the dark matter halos surrounding most galaxies extend far beyond the visible disks. So more interaction is taking place than we might think. Galaxy interactions also take a long time to occur, from hundreds of millions to a few billion years. So in order to see galaxy interactions, we need to catch them at the right time, during the 1 to 10 percent of the galaxy's life when the encounter takes place. Rich clusters of galaxies like the Coma Cluster give astronomers a good laboratory for seeing such interactions.

"Unlike a direct collision that produces a ring galaxy, wherein the direct pull of the companion's gravity rearranges the result, most galaxy interactions happen in less precisely targeted ways. A large number of galaxies, particularly those in groups and clusters, interact from tidal effects that change one or more spiral arms or distort just one area of a galaxy as one passes the other in space.

"The Whirlpool Galaxy is a good example of a tidal interaction between galaxies. The smaller galaxy, NGC 5195, is speeding by the larger galaxy, M51, and this scene is bright enough to be viewed in backyard telescopes. In the 1970s, the Estonian­ American astronomer Alar Toomre and his brother Jüri Toomre, an astrophysi­cist, produced computer simulations that helped them explain many types of galaxy interactions involving tidal tails. They identified the processes that led to the tidal tails visible in M51 and also in galaxies like the Antennae and the Mice." 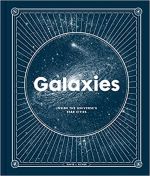