"Artist Hilma af Klint (1862-1944) created 193 paintings between 1906 and 1915 known as The Paintings for the Temple, the ambitious cycle that would come to define her. These works on canvas and on paper are far removed from the conventional landscapes and portraits that she perfected while attending the Royal Academy of Fine Arts in Stockholm years earlier. Rather, they are primarily abstract, with imagery born of botanicals and other natural forms that grew more simplified and geometric with time. Their production over the course of these years represents a radical effort by af Klint to find visual expression for a transcendent, spiritual reality beyond the observable world. …

"From the beginning, af Klint's Paintings for the Temple registered a deci­sive departure from conventional representation in favor of groundbreaking imagery. For what she wanted to convey on canvas, the academic traditions she knew had become insufficient. She produced symbols drawn from nature, religion, language, folk art, science, and the occult, arriving at a vocabulary of abstract forms, often mixed with representational elements, that had not been seen before. She explained these works as products of mystical receptivity, yet af Klint's active synthesis of the spiritual and scientific ideas of her time -- intellectual pursuits she followed through social circles and publications -- is evident throughout. Among these threads, Theosophy is pre­dominant. Af Klint was a member of the Swedish Lodge of the Theosophical Society, which originated in New York City in 1875. This spiritual movement drew much of its philosophy from Buddhism and Hinduism, and included the concept of reincarna­tion and the pursuit of divine knowledge through mystical experiences as principal tenets. The artist's familiarity with the ideas of Theosophy's founder, Madame Helena P. Blavatsky, underlay her belief in the search for a divine singularity, a basic unity lost at the moment of the world's creation.

"The subjects of unity and duality can be read throughout the work, starting with af Klint's first series among The Paintings for the Temple, which she titled Primordial Chaos (1906-07). This group of twenty-six small canvases sets out to illustrate the birth of the world and the origin of the dichotomies that she believed were a central principle of life. Conceived as an ordered progression of compositions, like nearly all of af Klint's series and groups, Primordial Chaos begins with images of a roiling, ambiguous mass. Emanating energy, the form gives rise to shapes and creatures, marine-like, rendered in mainly blue, yellow, and green. In af Klint's symbolic lexicon, blue is the female color, yellow is male. When coupled with hue interpretations out­lined in Johann Wolfgang von Goethe's Theory of Colours (1810), a book found in af Klint's library, the artist's dichotomous message is further emphasized -- yellow is next to light, blue is next to darkness, and green is the result of their harmonious union.

"As the culminating expressions of The Paintings for the Temple, the Altar­pieces were meant to occupy the inner sanctum of af Klint's temple. As she described in a late notebook, from 1930-31, the building was to be round, like two sites of contemplation and spirit that af Klint knew well: the twelfth-century church on the island of Munso, where af Klint had a home from 1912 until the end of her life, and Steiner's Goetheanum in Dornach, Switzerland, the seat of Anthroposophy, which af Klint regularly visited between 1920 and 1930. Af Klint's designs show a three-level structure of stacked rings, tapering upward and connected by a four-story central tower with a spiral staircase. As in a Mesopotamian ziggurat, where a temple sits atop a stepped, pyramidal form, an altar room sits at the top of af Klints building. Within each level, devotees would progress inward, winding from the periphery to the center, on a path in the shape of a spiral, the form so integral to her paintings. They would encoun­ter 'physical pictures' on the ground floor and move upward toward the topmost level to stand before the Altarpieces. Af Klint imagined that the construction would be imbued with 'a certain power and calm.' The spiral, symbol of evolution, progress, and growth, and linked to forces of nature, embodies and houses af Klint's visions." 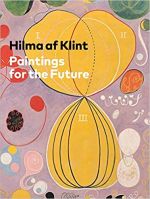