Today's encore selection -- from Art Now by Uta Grosenick & Burkhard Riemschneider. Since arriving on the national arts scene in 1978, Cindy Sherman's photography has been so influential and imitated that much has become almost cliched. But Sherman is an original:

"In 1978, at the age of 23, Cindy Sherman began her landmark photographic series, Untitled Film Stills [now in the permanent Museum of Modern Art collection in New York City]. In each small-format black and white image, Sherman plays a different role -- prim office worker, suburban housewife, glamorous femme fatale -- in a minutely staged, psychologically intense drama. Although she is the only character in shot, her transformation in each image is so complete that her personal identity disappears, and instead of a series of self-portraits we have a comprehensive repertoire of 20th-century female stereotypes.

"For most of the 1980s, Sherman continued to use her body as her central prop, working with color photography to explore aspects of horror, violence and the grotesque. The Fairy Tales 1984-86, Disaster Series 1987-89, and Sex Pictures 1992 employed an array of prosthetic teeth, snouts and breasts, mysterious liquids, rotting food, and anatomically rearranged mannequin limbs to portray nightmarish visions of deformity and scenes of sexual violence, half seen, half imagined. A palpable tension exists between the pictures' seductive vividly colored surfaces and their disgusting anxiety-producing subject matter. This sense of anxiety is apparent throughout Sherman's work. Her most recent series, Untitled, features twelve new fictional characters -- all over-tanned, over-dressed, heavily made-up women 'of a certain age.' Occupying the narrow terrain between pathos and parody, these large-format color portraits examine women's attempts to defy, deny or at least slow down old age, while suggesting the small disappointments and minor tragedies embedded in each character's personal history."

Cindy Sherman at the MoMA 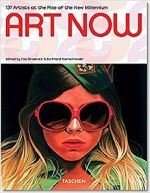