In today's selection -- there had long been some level of fur trading in North America dating back to the earliest European explorations of the continent. However, a chance discovery in 1779 turned the fur trade into a global phenomenon with millions of furs trading hands and species being decimated. And even though larger numbers of furs were from seals, beaver, and other animals, by far the most prized furs were from the sea otter. The sea otter trade established a new bloody triangle of commerce from the American northeast to the Pacific Northwest to the Chinese port of Canton -- with stops in Hawaii for "sexual favors freely offered":

"[John Ledyard] was a restless wanderer who needed adventure, which he found on July 5, 1776, when he signed on as a corporal on HMS Resolution, one of two ships that the famed British explorer James Cook was leading to the Pacific Ocean in an attempt to find the fabled Northwest Passage to the Orient.

"The passage was never found, but one discovery had a major impact on subsequent events. It began innocently enough in March 1778, when Cook's ships reached the Pacific Northwest coast and anchored in Nootka Sound on the west side of present-day Vancouver Island. The local Indians paddled out to the ships in their canoes, and, according to Cook, 'a trade commenced betwixt us and them, which was carried on with the strictest honesty on both sides. The articles which they offered to sale were skins of various animals, such as bears, wolves, foxes, deer, raccoons, polecats, martens; and, in particular,. . . sea otters.' Cook's men snapped up the furs to make new clothes to replace theirs, which were in tatters after nearly two years at sea, giving the Indians 'knives, chisels, pieces of iron and tin, nails, looking-glasses, and buttons.' In the coming months Cook's crew would accumulate fifteen hundred pelts in all. 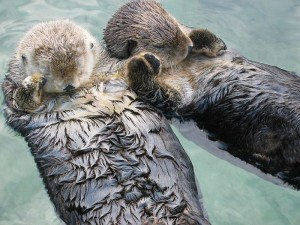 "Although Cook's men had acquired the pelts for strictly utilitar­ian purposes, when they arrived at the port of Canton, China, in late 1779, they realized they had a veritable fortune on their hands. The Chinese, who treasured furs for their warmth and beauty, were will­ing to pay exorbitant prices. Of all the pelts the men had, the most valuable were the sea otters', for good reason. The sea otter (Enhydra lutris) is enveloped in a sensationally lustrous and soft fur coat that is the densest of any mammal, with as many as one million hairs per square inch. One nineteenth-century American merchant declared that ... the sea otter's pelt was ... the most beautiful natural object in the world. Particularly fine skins [which did not cost the purchaser six pence sterling] commanded as much as $120 apiece in Canton, and even worn-out pelts garnered a good price. Such huge sums had a galvanizing effect on the men, precipitating in them an almost uncontrollable urge to return immediately to the Pacific Northwest to gather more furs. In fact a near mutiny ensued, but order was maintained, and the ships returned to London in early 1780. ...

"[Trappers] pursued sea otters off the coast of California in one-to three-person, skin-covered kayaks called baidarkas, which were twelve to twenty-one feet long, and less than two feet wide. In this highly maneuverable, shallow-draft watercraft, the natives could stealthily approach sea otters sleeping among fronds of kelp floating at the surface, and hurl a bone- or shell-tipped spear into the animals' flanks, or even club them to death. If the otters were awake, the hunt­ers would form a broad circle around the spot where the otter was last seen, and wait for it to resurface. As soon as it did, one of the baidarkas would rush forward, while the other hunters yelled, the goal being to force the sea otter to dive before it could catch a good breath. The circle would grow ever smaller as the procedure was repeated until the increasingly tired otter was so close that that one of the men was able to kill it. On occasion the natives also used nets to snare the otters, and guns to shoot them.

"Hundreds of thousands of sea otter skins were funneled from the Pacific Northwest and California to Canton. But the astounding sums that Cook's men had obtained for their sea otter pelts were not sustained, because as more pelts entered the market, prices dropped. The pelts remained quite valuable, however, selling mostly in the range of twenty to thirty dollars apiece, fueling profits that often exceeded 300 percent of the cost of the voyage, and once rose as high as 2,200 percent. 'The lucrative traffic in which the rich furs of north­western America were exchanged for the dollars of Canton,' observed a nineteenth-century writer, 'may be compared to the collection of stream gold, yielding an unalloyed gem with the exertion of very little labor or skill, as long as the deposit lasts.'

"American sea otter traders made a point of stopping in Hawaii on their journeys across the Pacific to rest, gather supplies, hire natives to work on the ships, and enjoy the seductive charms of island life, not the least of which were the sexual favors freely offered by native women."