delanceyplace.com 3/4/13 - congressmen cursing and violently attacking each other

In today's selection -- if you read the United States Constitution, you will quickly see that the largest section is devoted to Congress, with much less space devoted to the President and even less to the Supreme Court (and with a Bill of Rights tacked on to the end). In fact, the founding fathers did envision the government as "Congress-centric," and did not envision the President as leading Congress, much less having a legislative agenda. Still, the founding fathers had believed Congress would be filled by selfless men who would put aside their individual interests in favor of the entire nation's -- and hoped congressmen would be elected "at-large" in states, rather than from separate districts, to insure that the most "distinguished and enlightened" people would be elected, and not those who would stoop so low as to campaign. Thus, in April 1789 as the very first U.S. Congress was convened, they were surprised to find those first congressmen "on their feet, shouting invectives, attacking individuals violently, and making irrelevant speeches":

"Article I of the Constitution, with its ten sections, is by far the longest article in the document. It is devoted to the Congress, and naturally, as the most republican part of the new national government, the Congress was the first institution to be organized. Indeed, during its first session, beginning in April 1789, it was virtually the entire central government. Although the president was inaugurated at the end of April, the subordinate executive offices were not filled until late in the summer; and the judiciary was not created until just before adjournment in the early fall. The short Article III of the Constitution had prescribed only a Supreme Court for the nation and had left the possibility of establishing other federal courts to the Congress's discretion. ...

"The First Congress that gathered in New York had been elected in 1788 by the people of the states, or in the case of the Senate, by the state legislatures. The Constitution had left to each state the mode of electing the House of Representatives. Given the Federalist desire to enlarge the electorate for each congressman and thus help to ensure that only the most distinguished and enlightened were elected, the major issue in the states had been whether to elect all the congressional representatives at-large or to elect them by district. In 1788 most of the large states (Massachusetts, New York, North Carolina, South Carolina, and Virginia) had elected their congressmen by districts, while most of the small states, along with Pennsylvania, had elected them statewide. Some warned that district elections were apt to keep out 'the man of abilities.' Instead of getting a liberally educated and cosmopolitan congressman, district elections would likely result in a narrow-minded demagogue. He would be, wrote one sarcastic Marylander, someone who would 'have nothing to recommend him but his supposed humility, who will not be too proud to court what are generally called the poor folks, shake them by the hand, ask them for their vote and interest, and, when an opportunity serves, treat them to a can of grog, and whilst drinking of it, join heartily in abusing what are called the great people.'

"Many of the members of the Congress were quite distinguished. ... Indeed, Washington declared that 'the new Congress on account of the self-created respectability and various talents of its Members, will not be inferior to any Assembly in the world.' Still, when [James] Madison looked over the list of those elected with him to the House of Representatives, the future looked troublesome. ... His high hopes that the Congress might be free of the 'vicious arts' of democracy that had plagued the states now seemed more doubtful. He was worried that too many men of 'factious tempers' and 'local prejudices' had been elected. 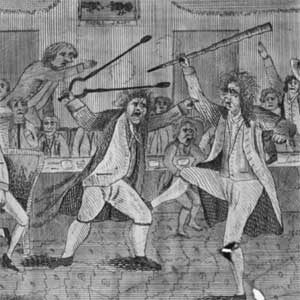 Lyon-Griswold Brawl (1798): Outraged by this brawl on the floor
of the House of Representatives, many concluded that Congress had
become contemptible in the eyes of all "polite or genteel" societies.
(Library of Congress)

"The House of Representatives took seriously the belief that it was the more democratic branch of the legislature, much closer to the people than the supposedly aristocratic Senate. It certainly tended to act in a more popular manner. The members of the House paid little attention to ceremony and dignities and sometimes shocked the Senate with their raucous and disorderly behavior. At times three or four representatives would be on their feet at once, shouting invectives, attacking individuals violently, telling private stories, and making irrelevant speeches. During the First Congress, it certainly was by far busier than the Senate. In its first three sessions it considered 146 different public bills, while the Senate considered only 24.

"The House decided at the outset to open its debates to the public. Since the British Parliament and the colonial legislatures had deliberately kept their legislative proceedings hidden from the outside world, this decision marked a significant innovation. Young James Kent, a future chancellor of New York, was an early visitor to the gallery and was overcome with emotion. He thought it was 'a proud & glorious day' to have 'all ranks and degrees of men' present in the gallery 'looking upon an organ of popular will, just beginning to breathe the Breath of Life, & which might in some future age, much more truly than the Roman Senate, be regarded as 'the refuge of nations.' ' "