delanceyplace.com 4/9/13 - a vast colony of criminals

In today's selection -- in 1787, fresh in the wake of losing their American colonies, the British started a colony of another sort. In a social experiment grotesque in its purpose and scale, the British shipped over 160,000 criminals -- including men, women and children -- as far out of sight as possible, to an largely uncharted outpost on the other side of the world:

"In 1787, the twenty-eighth year of the reign of King George III, the British Government sent a fleet to colonize Australia. Never had a colony been founded so far from its parent state, or in such ignorance of the land it occupied. There had been no reconnais­sance. In 1770 Captain James Cook had made landfall on the unexplored east coast of this utterly enigmatic continent, stopped for a short while at a place named Botany Bay and gone north again. Since then, no ship had called: not a word, not an observation, for seventeen years, each one of which was exactly like the thousands that had preceded it, locked in its historical immensity of blue heat, bush, sandstone and the measured booming of glassy Pacific rollers. 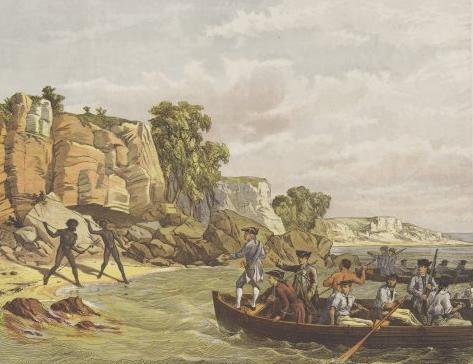 "Now this coast was to witness a new colonial experiment, never tried before, not repeated since. An unexplored continent would become a jail. The space around it, the very air and sea, the whole transparent labyrinth of the South Pacific, would become a wall 14,000 miles thick.

"The late eighteenth century abounded in schemes of social goodness thrown off by its burgeoning sense of revolution. But here, the process was to be reversed: not Utopia, but Dystopia; not Rousseau's natural man moving in moral grace amid free social contracts, but man coerced, exiled, deracinated, in chains. Other parts of the Pacific, especially Ta­hiti, might seem to confirm Rousseau. But the intellectual patrons of Australia, in its first colonial years, were Hobbes and Sade.

"In their most sanguine moments, the authorities hoped that it would eventually swallow a whole class -- the 'criminal class,' whose exis­tence was one of the prime sociological beliefs of late Georgian and early Victorian England. Australia was settled to defend English property not from the frog-eating invader across the Channel but from the marauder within. English lawmakers wished not only to get rid of the 'criminal class' but if possible to forget about it. Australia was a cloaca, invisible, its contents filthy and unnameable. Jeremy Bentham, inveighing against the 'thief-colony' in 1812, argued that transportation:

was indeed a measure of experiment . . . but the subject-matter of experi­ment was, in this case, a peculiarly commodious one; a set of animae viles, a sort of excrementitious mass, that could be projected, and accord­ingly was projected -- projected, and as it should seem purposely -- as far out of sight as possible.

"To most Englishmen this place seemed not just a mutant society but another planet -- an exiled world, summed up in its popular name, 'Bot­any Bay.' It was remote and anomalous to its white creators. It was strange but close, as the unconscious to the conscious mind. There was as yet no such thing as 'Australian' history or culture. For its first forty years, everything that happened in the thief-colony was English. In the whole period of convict transportation, the Crown shipped more than 160,000 men, women and children (due to defects in the records, the true number will never be precisely known) in bondage to Australia. This was the largest forced exile of citizens at the behest of a European gov­ernment in pre-modern history. Nothing in earlier penology compares with it. In Australia, England drew the sketch for our own century's vaster and more terrible fresco of repression, the Gulag. No other country had such a birth, and its pangs may be said to have begun on the after­noon of January 26, 1788, when a fleet of eleven vessels carrying 1,030 people, including 548 male and 188 female convicts, under the command of Captain Arthur Phillip in his flagship Sirius, entered Port Jackson or, as it would presently be called, Sydney Harbor."