In today's selection -- excommunication. In Europe's Middle Ages, a fearsome form of punishment for kings, noblemen and merchants alike was excommunication by the Church. Though even in this highly religious period not all feared the spiritual dimension of excommunication, the economic consequences were serious. A nobleman or merchant who was excommunicated could be required to forfeit his wealth or property, and could not rely on protection from those who took it from him. And so the kings of Europe, almost always cash-strapped, could use excommunication as a way to fill their coffers. And even a king could have his lands taken from him through excommunication, leaving noblemen who otherwise would owe him fealty free to rebel against him. Thus one of Europe's Holy Roman Emperors traveled to stand in the snow outside the pope's residence until that pope restored his standing in the church:

"While the penalty may not have both­ered everyone spiritually, it carried serious social and economic overtones even for non-Christians. Those excommunicated were put at a distinct dis­advantage among their peers and found that certain economic and social doors were closed to them. As a result, excommunication was more serious than it would otherwise appear and had to be taken seriously by even the nominally faithful.

"As the church extended its power over the empire and secular rulers, excommunication became a convenient tool through which to express its po­litical will. One hundred years before the Third Lateran Council, the young Holy Roman Emperor challenged the authority of Pope Gregory VII, the former monk known as Hildebrand. Henry challenged the pope's authority only to find that he was excommunicated from the church, which would have proved a valid excuse for princes to rebel from his authority. The lan­guage of the pope was explicit and contained more than a simple admoni­tion against disobedience. 'I now declare ... that Henry, son of the Emperor Henry, is deprived of his kingdom of Italy and Germany,' he wrote in 1076. As a result, Henry traveled to Canossa in the Alps in 1077, where the pope was staying, and stood penitentially outside his residence in the snow until Gregory forgave his sins and restored his standing in the church. The spec­tacle of an emperor having to do penitence in such a manner was one of the medieval world's most enduring images and made a strong impression on the faithful and non-believers alike. 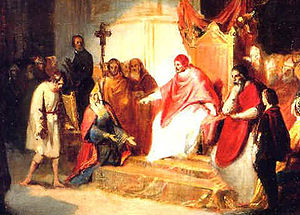 Henry IV and Pope Gregory VII in Canossa 1077,
as depicted by Carlo Emanuelle

"Within their own realms, kings were able to confiscate the property of the excommunicated under their jurisdiction. Although a direct legal link between church and secular law was tenuous, the religious codes formed the basis of the secular law and that was enough to provide the basis for the con­fiscation of property. The convenience factor was also present. The prop­erty of excommunicants proved too tempting a lure to ignore for sovereigns constantly in need of money [and] expropriation became a convenient method of raising money in the Middle Ages."