delanceyplace.com 6/27/13 - thelonious monk, 'round midnight, and the atomic age

In today's encore selection -- in the dawn of the Atomic Age, the hottest music trend was bebop. Fast and dissonant, it packed returning soldiers into New York's nightclubs on The Street -- 52nd Street. The high priests of this music were Charlie "Bird" Parker, Dizzy Gillespie, and their young protege Miles Davis. To those players, the father of this new music was Thelonious Monk, with " 'Round Midnight," his angst-laden song filled with all the strange angularities of the new music:

"The war officially ended on September 2, 1945. A celebratory mood pervaded the country, including The Street, where the hipsters were usually too cool to care. War-weary New Yorkers were ready to put the past behind them and embrace the promise of peace, prosperity, and productivity. It was the dawn of a new era, the 'American Century,' when the U.S. emerged as the leading global power. Technology became the country's obsession -- the possibilities of space exploration, jet travel, the availability of cheap televisions and high-fidelity recordings. Speed was the order of the day. It was also a period of uncertainty. The atomic age had arrived, revealing an ominous side with the destruction of Hiroshima and Nagasaki, but also promising new sources of power (energy and military).

"Jazz was the perfect accompaniment to the new atomic age. It had become faster and more dissonant, without losing its sense of joy and humor. Audiences were drawn to Bird's velocity and his joyous, spring-like melodies. From Hawk [Coleman Hawkins], Monk, and company, came hip harmonies, danceable tempos, and nostalgic references to foot-stomping swing. ... The popularity of the clubs exploded. For anyone looking to cel­ebrate the return of the GIs, to laugh after so many years of killing and dying, here was exuberant fun. Monk pulled listeners in because he made them laugh and wonder if he was for real. Miles Davis would rush over to the Down Beat Club to catch Hawkins and Monk while on his break from playing with Bird. ... 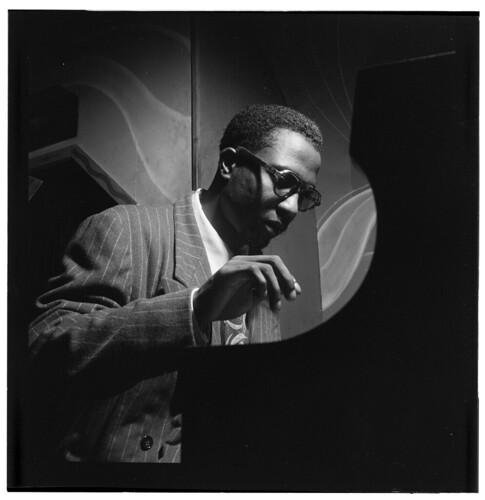 "Miles had great admiration for Monk as a teacher and elder (nine years separated them), and he found his compositions bril­liant and beautifully balanced. As someone who spent his days at Juilliard studying the great composers of the Western tradition, Miles believed ' 'Round Midnight' was as challenging as anything Ravel, Schoenberg, or Bach had to offer. ...

"Virtually every arts and entertainment maga­zine was scrambling for anything related to the hottest trend in music -- bebop. Besides the jazz mainstays -- Down Beat, Metronome, The Record Changer -- popular magazines such as The New Republic, Esquire, and Saturday Review began carrying profiles, editorials, and curiosity pieces on bebop and its major players throughout 1947, a good six months to a year before debates over the new music began to really heat up. The battles were fierce: bebop was great, or terrible. No one could define it musically, but that didn't matter. ... Of course, those musi­cians who came to represent the different camps continued to call music 'music,' and neither generational nor stylistic differences kept them from sharing the bandstand or a recording studio. But collaboration, flexibility of style, and ambiguity in genre distinc­tions didn't sell magazines.

"Bird and Diz suddenly became the new heroes -- or antiheroes, depending on one's stance -- in the jazz wars. And in virtually every interview they granted, they mentioned Thelonious Monk. Monk had mastered the new harmonic developments; he was one of the pioneers at Minton's Playhouse. Suddenly Monk came across as the 1940s ver­sion of Buddy Bolden, that missing link who started it all but then disappeared. To [Down Beat writer Bill] Gottlieb, he was 'the George Washington of bebop.' "