delanceyplace.com 7/12/13 - the uniqueness of the dogon people

In today's selection - the Dogon people of Mali. Isolated high in the cliffs of Mali near the city of Bandiagara, you will find the Dogon people, who have one of the most distinctive cultures in the world. Although their religious icons, masks, sculptures and architecture have in some respects become representative of Africa, their distinctiveness came from their intense, centuries-long desire to separate themselves from the dangers of their world:

"We had chosen Bandiagara because all of the tour books had described the little town as the gateway to the homeland of the Dogon, a people fabled throughout West Africa for their flinty independence and unusual lifestyle. Their lore had spread so deeply into Europe that Bandiagara and the nearby Dogon cliffs were becoming an obligatory pilgrimage for a certain kind of tourist back then: the bearded and braless northern European tribe who wore tie-dyes and sandals, in homage to what they imagined was a genuinely African lifestyle.

"Many Dogon still elected residences on the very face of the steep escarpments that rise from their Sahelian plain. Theirs was an existence in caves. They had deliberately kept their distance from the lifegiving Niger River in order to preserve their freedom from slave raids and forcible conversion to Islam, whether at the hands of the Bambara from the south or the Moroccans from the north. Their choice was stark and simple: Life would be harsh, but it would be their life, and it has remained that way up to the present. 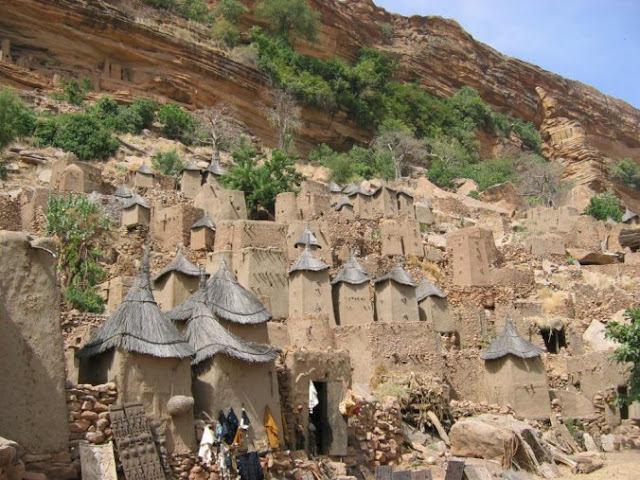 "Across the centuries, the Dogon had developed an extraordinarily sophisticated cosmology, one replete with detailed and precise observations of the heavens, and a particular focus on Sirius, which at 8.6 light-years away is the brightest star in the sky. Without the benefit of modern scientific instruments, somehow they had also divined the existence of a dwarf companion star to Sirius, which they named Po Tolo. Long ago they had accurately described its orbit and said it was composed of a metal that they believed was the densest material in the universe. Although telescopes had first noted this companion star a century ago, until 1970 Western astronomers weren't able to photograph what the Dogon had said was there all along.

"When the French anthropologist Marcel Griaule began writing about their cosmology in the 1950s, the Dogon suddenly became a kind of pre-modern freak show, a people whose cultural achievements, like the building of the pyramids or the construction of the monumental statues on Easter Island, knew no simple explanation. Before our trip, I had read Griaule's book, a dizzying work full of talk about the dryness of the moon and the architecture of the Milky Way, but the protoscience that was attracting all the tourists was not what had drawn me to visit the Dogon. It was their rugged, hardheaded independence that intrigued me. ...

"At last, it seemed we were truly abandoning the beaten path and, by the look of things, even traveling back in time. The appearance of our fellow passengers seemed to confirm this impression. The women's faces and hands were stenciled with ceremonial dyes. Their gums, too, had been rendered black from treatment with charcoal-laden needles. Some of them wore huge, gold-leafed hoop earrings that tugged at their pierced earlobes under blazing red and gold headdresses.

"Theirs was a way-out concept of beauty, strikingly unaffected by the definitions of attractiveness in the West, whose standards had long ago worked their way into Africa's big cities, conveyed by movies, television shows and the ever-spreading tentacles of commerce and materialism. We had come a long way, and had peeled back many layers, I thought, congratulating myself that we were perhaps finally arriving in the 'authentic' Africa I was seeking."