In today's selection -- over the last few thousand years, contrary to popular belief, the predominate form of money was not gold or silver coins, but instead such things as clay tablets and -- in the case of England -- notched tally sticks. However, metal coins survive more readily than tablets and sticks, and so many historians have falsely assumed that most money was in the form of coins. In the case of England, a lack of understanding of this led to the wholesale destruction of one of the most important collections of source material in the history of money -- and indirectly led to the construction of London's beautiful Houses of Parliament so familiar to us today:

"[Almost all the money that survives] from earlier ages [is] of a single type -- coins. Museums around the world heave with coins, ancient and modern. Coins and their inscriptions are one of the main archaeological sources for the understanding of ancient culture, society, and history. ...

"But of course the ... reason why coins are so important in the study of ancient history, and why they have dominated in particular the study of the history of money, is that coins are what have survived. Coins are made of durable metals -- and very often of imperishable metals, such as gold or silver, which do not rust or corrode. As a result, they tend to survive the ravages of time better than most other things. What is more, coins are valuable. As a result, there has always been a tendency for them to be squirreled away in buried or hidden hoards -- the better to be discovered decades, centuries, or even millennia later by the enterprising historian or numismatist. The problem is that in no field so much as the history of money is an approach fixated upon what physically survives likely to lead us into error. The unfortunate story of the wholesale destruction of one of the most important collections of source material for the history of money ever to have existed shows why.

"For more than six hundred years, from the twelfth to the late eighteenth century, the operation of the public finances of England rested on a simple but ingenious piece of accounting technology: the Exchequer tally. A tally was a wooden stick -- usually harvested from the willows that grew along the Thames near the Palace of Westminster. On the stick were inscribed, always with notches in the wood and sometimes also in writing, details of payments made to or from the Exchequer. Some were receipts for tax payments made by landowners to the Crown. Others referred to transactions in the opposite direction, recording the sums due on loans by the sovereign to prominent subjects. '9£ 4s 4p from Fulk Basset for the farm of Wycombe' reads one that has survived, for example -- relating a debt owed by Fulk Basset, a thirteenth-century Bishop of London, to Henry III. Even bribes seem to have been recorded on Exchequer tallies: one stick in a private collection bears the suspicious-sounding euphemism '13s 4d from William de Tullewyk for the king's good will'. 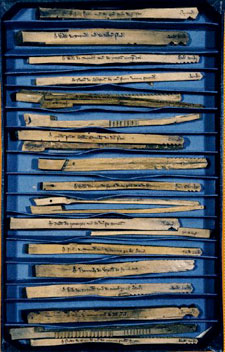 "Historians agree that the vast majority of fiscal operations in medieval England must have been carried out using tally sticks; and they suppose that a great deal of monetary exchange was transacted using them as well. A credit with the Exchequer, as recorded on a tally stick, would after all have been welcomed in payment by anyone who had taxes of his own coming due. It is, however, impossible to know for certain. For although millions of tallies must have been manufactured over the centuries, and though we know for sure that many thousands survived in the Exchequer archives up until the early nineteenth century, only a handful of specimens exist today. The ultimate culprit for this unfortunate situation is the famous zeal of England's nineteenth-century advocates of administrative reform. ...

"An Act of Parliament of 1782 officially abolished tally sticks as the main means of account-keeping at the Exchequer -- though because certain sinecures still operated on the old system, the Act had to wait almost another half-century, until 1826, to come into effect. But in 1834, the ancient institution of the Receipt of the Exchequer was finally abolished, and the last Exchequer tally replaced by a paper note.

"Once the tally-stick system had finally been abolished, the question arose of what to do with the vast archive of tallies left in the Exchequer. Amongst the partisans of reform the general feeling was that they were nothing but embarrassing relics of the way in which the fiscal accounts of the British Empire had been kept, 'much as Robinson Crusoe kept his calendar on the desert island', and it was decided without hesitation to incinerate them. Twenty years later, Charles Dickens recounted the unfortunate consequences:

"The Houses of Parliament could be rebuilt, of course -- and were, to leave the splendid Palace of Westminster that stands on the banks of the Thames today. What could not be resurrected from the inferno, however, was the priceless record of England's fiscal and monetary history constituted by the tallies."