delanceyplace.com 9/18/13 - "long flames shot from a wire across his neck"

In today's selection -- from The Age of Edison by Ernest Freeberg. Thomas Edison's invention was not a light bulb -- others had patented light bulbs before him -- but an entire system: a reliable and efficient electricity generator, wires to distribute that electricity over long distances, and reasonably long-lasting light bulbs at the end of those wires. And once they became available, American cities, much more than their European counterparts, clamored for these systems almost as a sign of progress and a matter of civic pride. Yet there were obstacles -- first, a competitive counterattack from the large and well-entrenched gas companies whose gas lamps already provided these cities with a less-bright but less expensive form of lighting. And second, the danger and unsightliness of the powerlines themselves -- which would have to be added overhead to streets already clogged with telegraph and telephone lines:

"When the Brush Company, [an Edison predecessor and competitor] first demonstrated the arc [electric] light in a downtown Cincinnati square [in 1878], the event spread panic among local investors, forcing [Cincinnati Gas Company vice president Andrew] Hickenlooper to use his own fortune to shore up the price of his company's stock. Months later, when Edison made his premature announcement that he had solved the 'puzzler' of incandescent lighting, the intrepid Hickenlooper once again donned a disguise, traveling to New York to impersonate a stock speculator so that he could investigate the matter firsthand. Returning to Cincinnati, he assured investors that the quest for a viable incandescent lamp was an old story and that Edison offered nothing new. At the time, this evaluation was as true as it was self-serving. He hedged his bet, however, by working to expand the market for gas in fields aside from lighting -- a strategy that would in the end save the gas companies from utter destruction. He hired Miss Dodds, recent graduate from a Boston culinary school, to give public demonstrations on the advantages of cooking with 'gaseous fuels.'

"Following Hickenlooper's lead, gas companies around the country fought back against electricity by consolidating their operations, lowering prices, and introducing new, more efficient technologies. They also called in favors from their political allies, ran special deals during 'gas lighting week' each spring, and kept up a steady drumbeat of propaganda about the dangers of electricity. 'Wide-awake' gas men assured each other that the recent boom for electricity was just a passing fad and that they were bound in the end to win the struggle between 'the gas meter and the dynamo.' Through all this, Hickenlooper continued to insist that if the city fathers granted contracts to rival lighting companies, both gas and electric, this would introduce chaos in the marketplace, ruinous competition that would ultimately produce higher prices and worse service. In the parlance of the economic debates of his day, Hickenlooper insisted that public lighting was a 'natural monopoly,' and that it should be his.

"A more immediate argument against electric lights came not from chaos in the markets but chaos in the streets, where rival arclight companies began to weave a thick web of poorly insulated high-tension wires overhead. Eager for more light, and sometimes private kickbacks, city politicians granted franchises to the various electric companies with no attempt to impose order or even minimal safety standards. And in a number of cities, hastily organized companies wasted no time asking anyone's permission. They just tacked their wires on whatever poles and building facings served their purpose, sometimes taking a cost-saving shortcut directly over some poor homeowner's roof.

"The electric companies strung these high-tension wires along streets already thick with wires for telephone, telegraph, fire and police alarms, and stock tickers. In dense urban intersections a pole might carry as many as two hundred different wires. Those lines were unsightly, but used a moderate current that posed no danger. All this changed when electric companies added their powerful and poorly insulated high-pressure arc wires to the mix. Hastily tacked up, these often broke loose and fell across the web of other wires overhead. Traffic stopped and crowds gathered as wires burned and sparked, sometimes flailing like 'fiery serpents.' In the 1880s, city residents often enjoyed these 'free fireworks displays,' but sometimes the results proved more serious. Once in contact with broken or sagging arc wires, harmless telegraph, fire alarm, and telephone wires delivered awful, even deadly shocks. At other times they burned and melted, causing numerous fires. The firemen who came to the rescue faced not only the risk of the blaze but also the danger of electrocution. During a serious fire in St. Louis, for example, firemen found themselves unable to retreat from a wall about to collapse, since they felt hemmed in by the deadly wires. The crackle of exploding wires spooked their horses, and at one point their ladder truck became so 'completely charged from fallen wires' that none dared approach it. Electric light companies delivered on their promise to avoid the dangers of burning gas, but only by introducing some nasty hazards of their own. 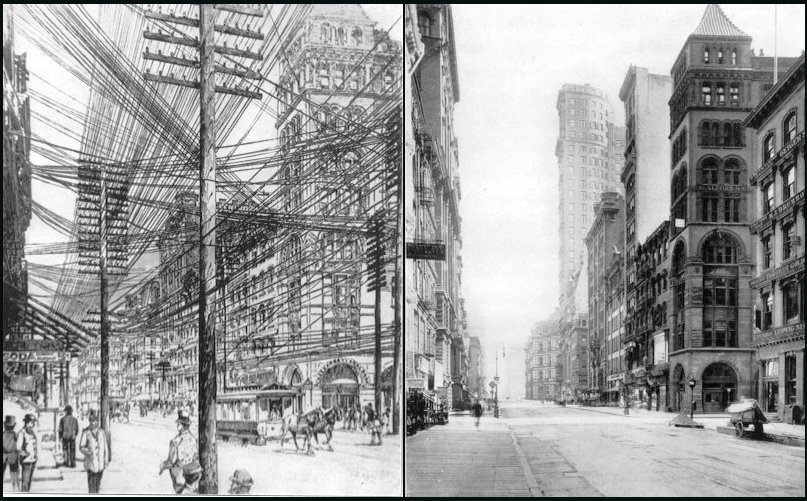 The drawing on left is New York City in the 1800s when the protocols and current standards where still being developed. The photo on the right is the same street 10 years later.

"For late-nineteenth-century city dwellers, the sky overhead became increasingly ominous, thick with wires that might pour down a man-made lightning bolt without warning. 'The overhead system,' one medical journal declared, 'is a standing menace to health and life.' Every week the papers ran stories of this very modern form of sudden death. A Memphis man tied his mule to an iron lamppost that had been accidentally electrified; the powerful current knocked the screaming mule off its feet, and when its owner came to the rescue he leaned against the post himself and was instantly killed. An Italian fruit vendor in Greenwich Village slipped while cleaning the roof of his shop, touching one of the dozens of electric wires converging there. He probably died instantly, but a horrified crowd gathered to watch his corpse sizzle, as long flames shot from a wire lying across his neck. Fearing their own electrocution, the police dared not go near until an electrician arrived to cut down the wires, A pole painter in Massachusetts slipped, grabbed the nearest wire with both hands, and found himself in the throes of eight hundred volts; only the heroic action of his partner saved his life, though his hands were horribly burned. Children playing in the streets fell victim quite often, as they enjoyed the sport of reaching for dangling wires or climbing on street poles. The old wires just tingled, but the new ones killed."