In today's selection -- today, the majority of politicians and economists advocate free trade among nations with no tariffs -- or at least equal tariffs between trading partners. However, from its inception in the 1780s almost until the twentieth century, America was a highly protectionist nation with heavy tariffs on imports. This was primarily because the fledgling American manufacturing base was not nearly strong enough to stand up to competition from powerhouse nations -- especially Britain. Furthermore, the trade situation was gravely out of balance with imports far exceeding exports. The situation was most dire in the 1780s and 1790s, but even decades later a politician as revered as Abraham Lincoln was a strong advocate of protectionist tariffs. (When America eventually became the world's manufacturing powerhouse -- in part because the tariff had provided a shield that allowed them to mature -- its views on tariffs changed). From the outset, though, this high-tariff posture favored the manufacturing-oriented states of the northern U.S. at the expense of the agriculture-exporting South:

"After the war ended in 1783, America's external economy was still tied to the British Empire almost as tightly as it had been before the Revolution. And while the country's imports rose by more than 69 percent during the twenty years from 1770 to 1790, its exports grew by only 2.7 percent, one twenty-sixth as much. This was a path to disaster. For the period 1787- 1792, more than 90 percent of all imported manufactures came from Britain. As against this incoming flood, only 43 percent of America's small quantities of exports went to Britain and its empire; 25 percent went to the French Empire, 10 percent to the Dutch Empire, 8 percent to the Spanish Empire, and 6 percent to the Portuguese Empire (mainly Brazil). At none of these destinations were American traders as welcome as they wished to be. Nowhere did American merchants sell as much as they could have in the absence of imperial restrictions. Nor, back home, could the thirteen states come to agreement among themselves as to what to do about it. 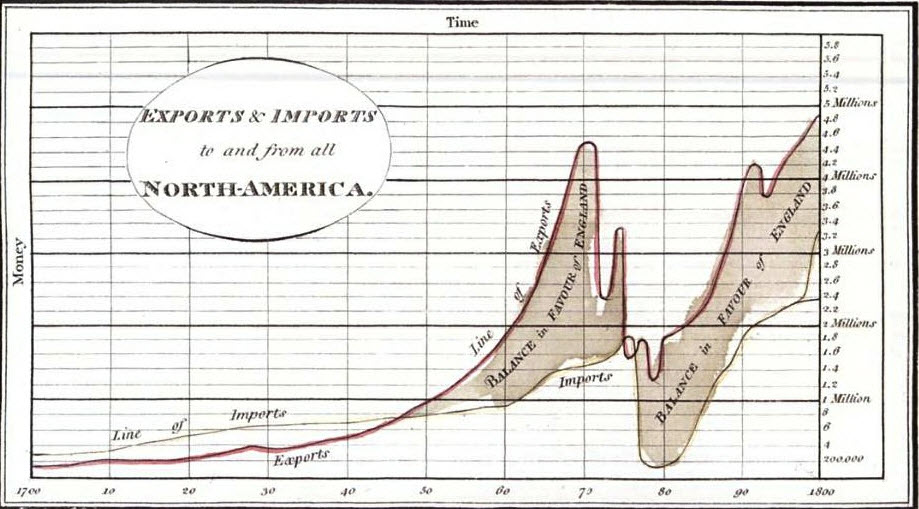 Imports and exports from America during the 18th century

"Heavy dependence for public funds on import tariffs (customs duties or 'imposts') made foreign policy inseparable from economic policy. Until the new government under the Constitution entered office in 1789, customs duties belonged not to the national government but to whatever state included the port where the incoming goods happened to enter. This was one of the many elements that had made the financing of the Revolution so chaotic.

"Then, too, both before and after 1789, such heavy reliance on imposts deepened sectional discord. Many Southerners disliked having to pay tariffs on imported British goods. They believed that the North, where manufacturing was more highly developed, could supply its local consumers with a larger amount of domestically made products than the South was able to do. This meant, in turn, that the South was having to buy proportionately more British goods, and, accordingly, having to contribute more than its share of duties on manufactured imports. And yet, tariffs on British imports furnished the bulk of all federal income. A reduction or stoppage of this income would imperil the new nation's independence. The intertwined issues of finance and foreign relations therefore tended to divide the country along sectional lines of North versus South.

"Because we know how this story turned out -- that the Union survived and prospered -- it is hard to imagine how perilous the situation of the 1780s and 1790s actually was."