In today's selection -- from A History of Western Art by Laurie Schneider Adams. Pop Art -- the art of Jasper Johns, Andy Warhol, and Roy Lichtenstein -- was a return to the concrete, and a reaction to the abstract art typified by Mark Rothko and Jackson Pollock. The beginning of this movement can be traced to a 1956 work by Richard Hamilton titled Just what is it that makes today's homes so different, so appealing? The term "Pop" came from the large Tootsie Pop in the middle of the piece:

"In the late 1950s and 1960s, a reaction against the non-figurative and seemingly subjective character of Abstract Expressionism took the form of a return to the object. The most prominent style to emerge in America in the 1960s was 'Pop,' although the origins of the style are to be found in England in the 1950s. The imagery of Pop Art was derived from commercial sources, the mass media, and everyday life. In contrast to Abstract Expressionism -- which viewed works of art as revelations of the artist's inner, unconscious mind -- the Pop artists strove for 'objectivity' embodied by an imagery of objects. The impact of Pop Art was enhanced by the mundane character of the objects selected. As a result, Pop Art was regarded by many as an assault on accepted conventions and aesthetic standards. ...

"Despite the 1960s emphasis on the objective 'here and now,' however, the artists of that period were not com­pletely detached from historical influences or psychological expression. The elevation of everyday objects to the status of artistic imagery can be traced to the early-twentieth-century taste for 'found objects' and assemblage. Likewise, the widespread incorporation of letters and numbers into the new iconography of Pop Art reflects the influence of the newspaper collages produced by Picasso and Braque. ...

"The small collage Just what is it that makes today's homes so different, so appealing?, by the English art­ist Richard Hamilton (born 1922), was originally intended for reproduction on a poster. It can be considered a visual manifesto of what was to become the Pop Art movement. First exhibited in London in a 1956 show titled 'This Is Tomorrow,' Hamilton's collage inspired an English critic to coin the term 'Pop.' The muscleman in the middle of the room is a con­flation of the Classical Spear Bearer by Polykleitos and the Medici Venus. The giant Tootsie Pop directed toward the woman on the couch is at once a sexual, visual, and verbal pun. Advertising images occur in the sign pointing to the vacuum hose, the Ford car emblem, and the label on the tin of ham. Mass-media imagery is explicit in the tape recorder, television set, newspaper, and movie theater. The framed cover of Young Romance magazine reflects popular teenage read­ing of the 1950s. 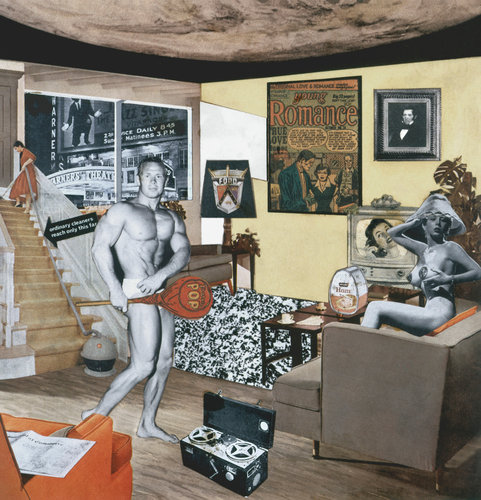 Richard Hamilton's "Just What Is It That Makes Today's Homes So Different, So Appealing?"
The 1956 collage is often referred to as the first example of Pop Art.

"Despite the iconographic insistence on what was con­temporary, however, Hamilton's collage contains tradi­tional historical references. The image of a white-gloved Al Jolson on the billboard advertising The Jazz Singer recalls an earlier era of American entertainment. The old-fashioned portrait on the wall evokes an artistic past, and the silicon pinup on the couch is a plasticized version of the traditional reclining nude. Hamilton's detailed atten­tion to the depiction of objects, especially those associated with domestic interiors, reveals his respect for fifteenth-century Flemish painters, as well as his stated admiration for Duchamp."