In today's encore selection -- as reported by Pulitzer Prize winning author Jeffrey Marx in Season of Life: A Football Star, a Boy, a Journey to Manhood. Gilman High School in Maryland has a highly successful football team. And its coaches have a few unusual rules -- such as an ironclad rule that no Gilman football player should ever let another Gilman boy -- teammate or not -- eat lunch by himself. And the requirement that players constantly base their thoughts and actions on one simple question: What can I do for others?:

"What happened that first day at Gilman [High School] was entirely unlike anything normally associated with high school football. It started with the signature exchange of the Gilman football program -- this time between [head coach] Biff [Poggi] and the gathered throng of eighty boys, freshmen through seniors, who would spend the next week practicing together before being split into varsity and junior varsity teams.

" 'What is our job?' Biff asked on behalf of himself, Joe, and the eight other assistant coaches.

" 'To love us,' most of the boys yelled back. The older boys had already been through this routine more than enough times to know the proper answer. The younger boys, new to Gilman football, would soon catch on.

'To love each other,' the boys responded.

"I would quickly come to realize that this standard exchange -- always initiated by Biff or [defensive coach] Joe [Ehrmann] -- was just as much a part of Gilman football as running or tackling. 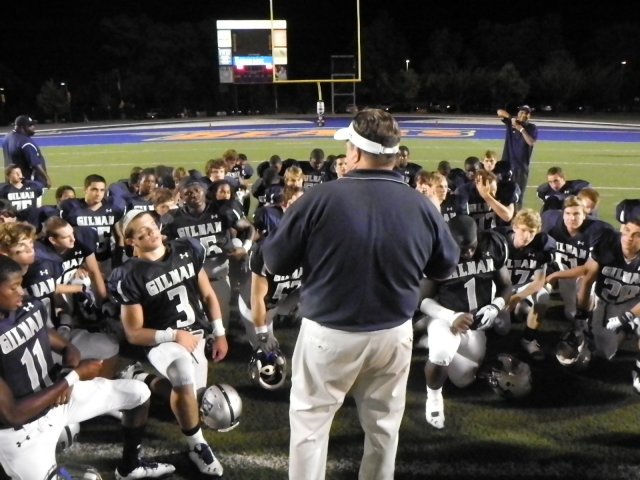 " 'I don't care if you're big or small, huge muscles or no muscles, never even played football or star of the team -- I don't care about any of that stuff,' Biff went on to tell the boys, who sat in the grass while he spoke. 'If you're here, then you're one of us, and we love you. Simple as that.' ...

" 'I expect greatness out of you,' Biff once told the boys. 'And the way we measure greatness is the impact you make on other people's lives.'

"How would the boys make the most impact? Almost anything Biff ever talked about could be fashioned into at least a partial answer to that question.

"For one thing, they would make an impact by being inclusive rather than exclusive.

" 'The rest of the world will always try to separate you,' Biff said. 'That's almost a law of nature -- gonna happen no matter what, right? The rest of the world will want to separate you by race, by socioeconomic status, by education levels, by religion, by neighborhood, by what kind of car you drive, by the clothes you wear, by athletic ability. You name it -- always gonna be people who want to separate by that stuff. Well, if you let that happen now, then you'll let it happen later. Don't let it happen. If you're one of us, then you won't walk around putting people in boxes. Not now. Not ever. Because every single one of them has something to offer. Every single one of them is special. Look at me, boys.'

" 'We are a program of inclusion,' Biff said. 'We do not believe in separation.'

"The boys would also make an impact by breaking down cliques and stereotypes, by developing empathy and kindness for all.

"'Feeling what the other person feels,' said senior Napoleon Sykes, one of the team captains, a small but solid wide receiver and hard-hitting defensive back who had already accepted a scholarship to play college football at Wake Forest.

" 'Exactly right,' Biff said. 'Not feeling for someone, but with someone. If you can put yourself in another man's shoes, that's a great gift to have for a lifetime.'

"That was the whole idea behind Biff and Joe's ironclad rule that no Gilman football player should ever let another Gilman boy -- teammate or not -- eat lunch by himself.

" 'You happen to see another boy off by himself, go sit with him or bring him over to sit with you and your friends,' Biff said. 'I don't care if you know him or not. I don't care if he's the best athlete in the school or the so-called nerd with his head always down in the books. You go get him and you make him feel wanted, you make him feel special. Simple, right? Well, that's being a man built for others.'

"How else would the boys make an impact?

"By living with integrity ... and not only when it is convenient to do so. Always.

"By seeking justice ... because it is often hidden.

"By encouraging the oppressed . . . because they are always discouraged.

"Ultimately, Biff said, the boys would make the greatest overall impact on the world -- would bring the most love and grace and healing to people -- by constantly basing their thoughts and actions on one simple question: What can I do for you?

"Biff and Joe would constantly elaborate on all of this as the season progressed.

" 'Because in case you haven't noticed yet, we're training you to be different,' Biff said. 'If we lose every game of the year, go oh-and-ten on the football field, as long as we try hard, I don't care. You learn these lessons, and we're ten-and-oh in the game of life.' "

with thanks to BJK