In today's selection -- from The Guardian of All Things by Michael S. Malone. Today, much of our thoughts and memories are organized around written words. But before the invention of writing, written words had no place in our thoughts and memories, and the invention of writing profoundly changed the way we think and remember. And different types of writing -- especially the logographic symbols used in the writing of the Far East as opposed to the alphabetic writing of the Middle East and West -- may have influenced the way those different civilizations developed and were organized:

"For most of us today, 5,000 years [after the emergence of writing], written language is so embedded into the operation of our brains that it is difficult to notice just how much our thoughts and our memories are built around printed words. ...

"[Today], much of the world, even the nations of the Far East that officially adhere to their traditional logographic symbols, has developed parallel alphabets using Latin/Phoenician letters even as they teach their children to be bilingual in their native tongue and the emerging global form of English. 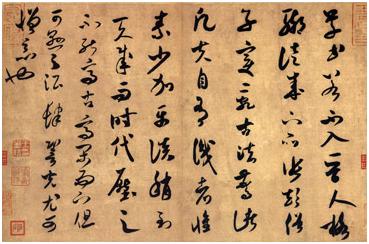 "But 4,000 years ago, this was certainly not the case, and it is interesting to speculate how different types of writing played a distinct role in how we organized our brains, remembered, and even looked out at the world. In other words, when you organize your brain -- and particularly, your memory -- around writing, then the type of writing you use matters a whole bunch.

"For example, alphabetic writing, with the freedom created by its tiny building blocks (phonemes) and flexible grammar, would seem to reinforce individualism, innovation, and a civic form of democracy, but it would also perpetually run the risk of collapsing into chaos. Logographic writing, because of the sheer difficulty of learning it, would seem to reward a more stratified and rigid society, with academic and scribe classes, but it might also feature a much stronger cultural aestheticism (every word being a painting) and naturalism. And the syllabic languages, because they are much easier to learn, would seem to be an advantage for mercantilism and trade and, because they would lead to higher rates of literacy, to greater cultural democracy.

"Obviously, as history reminds us, writing isn't destiny. But there is enough correlation between the traits of these types of writing and the cultures that produced them to suggest this is more than a coincidence -- that there is some causal link between a culture's writing style and the way it sees and remembers the world around it, how it orders its society, and what it values. And while many of these characteristics are fading in light of the global economy, the Internet, and mass communications, enough remains to add to the tensions of the modern world."