"If you're younger than forty or never spent much time in the United States, you might not recognize the Fuller Brush Man. But if you're an American of a certain age, you know that once you couldn't avoid him. Brigades of salesmen, their sample cases stuffed with brushes, roamed middle-class neighborhoods, climbed the front steps, and announced, 'I'm your Fuller Brush Man.' Then, offering a free vegetable scrubber known as a Handy Brush as a gift, they tried to get what quickly became known as 'a foot in the door.' 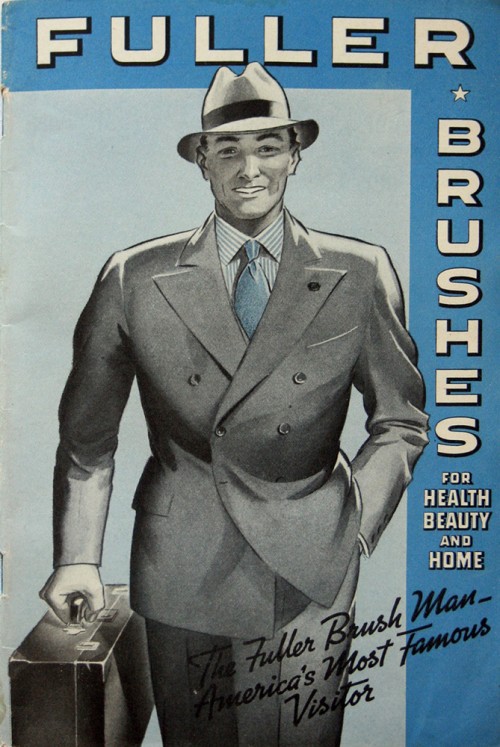 "It all began in 1903, when an eighteen-year-old Nova Scotia farm boy named Alfred Fuller arrived in Boston to begin his career. He was, by his own admission, 'a country bumpkin, overgrown and awkward, unsophisticated and virtually unschooled' -- and he was promptly fired from his first three jobs. But one of his brothers landed him a sales position at the Somerville Brush and Mop Company -- and days before he turned twenty, young Alfred found his calling. 'I began without much preparation and I had no special qualifications, as far as I knew,' he told a journalist years later, 'but I discovered I could sell those brushes.'

"After a year of trudging door-to-door peddling Somerville products, Fuller began, er, bristling at working for someone else. So he set up a small workshop to manufacture brushes of his own. At night, he oversaw the mini-factory. By day he walked the streets selling what he'd produced. To his amazement, the small enter­prise grew. When he needed a few more salespeople to expand to additional products and new territories, he placed an ad in a pub­lication called Everybody's Magazine. Within a few weeks, the Nova Scotia bumpkin had 260 new salespeople, a nationwide business, and the makings of a cultural icon.

"By the late 1930s, Fuller's sales force had swelled to more than five thousand people. In 1937 alone, door-to-door Fuller dealers gave away some 12.5 million Handy Brushes. By 1948, eighty-three hundred North American salesmen were selling cleaning and hair 'brushes to 20 million families in the United States and Can­ada,' according to The New Yorker. That same year, Fuller salesmen, all of them independent dealers working on straight commission, made nearly fifty million house-to-house sales calls in the United States -- a country that at the time had fewer than forty-three mil­lion households. By the early 1960s, Fuller Brush was, in today's dollars, a billion-dollar company.

"What's more, the Fuller Man became a fixture in popular culture. ... In the Disney animated version of 'The Three Little Pigs,' which won an Academy Award in 1933, how did the Big Bad Wolf try to gain entry into the pigs' houses? He disguised himself as a Fuller Brush Man. How did Donald Duck earn his living for a while? He sold Fuller Brushes. In 1948 Red Skelton, then one of Hollywood's biggest names, starred in The Fuller Brush Man, a screwball comedy in which a hapless salesman is framed for a crime -- and must clear his name, find the culprit, win the girl, and sell a few Venetian blind brushes along the way. Just two years later, Hollywood made essentially the same movie with the same plot -- this one called The Fuller Brush Girl, with the lead role going to Lucille Ball, an even bigger star. As time went on, you could find the Fuller Brush Man not only on your doorstep, but also in New Yorker cartoons, the jokes of TV talk-show hosts, and the lyrics of Dolly Parton songs.

"What a Fuller Man did was virtuosic. 'The Fuller art of open­ing doors was regarded by connoisseurs of cold-turkey peddling in somewhat the same way that balletomanes esteem a performance of the Bolshoi -- as pure poetry,' American Heritage wrote. 'In the hands of a deft Fuller dealer, brushes became not homely com­modities but specialized tools obtainable nowhere else.' Yet he was also virtuous, his constant presence in neighborhoods turning him neighborly. 'Fuller Brush Men pulled teeth, massaged head­aches, delivered babies, gave emetics for poison, prevented suicides, discovered murders, helped arrange funerals, and drove patients to hospitals.' "