In today's selection -- from The Perennial Philadelphians: The Anatomy of an American Aristocracy by Nathaniel Burt. At the beginning, the United States was not a democracy. The framers had feared a true democracy, and thus up until 1913, senators were elected largely by state legislators, and the president by the electoral college. Only congressmen were voted on directly by the people. By the early to mid-1800s, attitudes and practices were rapidly changing. Andrew Jackson was elected in 1828, and since he was the first president who was not a member of the East coast establishment, it was viewed as a victory for the common man. Nevertheless, democracy was still opposed by many -- especially those from the elite classes. Here we learn the attitude toward democracy in the mid-1800s of Sidney Fisher, a member of one of the old line Philadelphia families:

"Says Sidney Fisher: 'The proper pursuit for a man of my position is the life of a gentleman farmer.' ... He was a gentleman of romantic good looks, the best family connections (his grandmother was a Logan) and not enough money, who led a rather querulous and useless life in Philadelphia during the nineteenth century. A representative 'disappointed man,' he dabbled at law and poetry, tried to live beyond his income, married an Ingersoll -- and kept a diary. The diary, discovered among the effects of his son, has almost daily entries from 1834 to 1871, and has been transcribed, all seventy-nine volumes of it, into typescript. ... There is an enormous amount about houses and furniture and parties and people, nothing about God and Mr. Fisher's conscience. ... 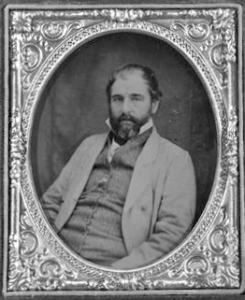 "His feeling about position and family of course was quite unequivocal: 'Luckily my fortune small as it is and my social position command respect from the mass,' and 'I am somewhat proud of my family, as on both sides my ancestors for five or six generations have held the stations of gentlemen and men of property and education -- which is something in this country of parvenus.' This country as opposed, of course, to England, which he never saw and knew only by hearsay, but which he regarded in true Tory-colonial fashion as his spiritual home; the England of the landed gentry, not of Reform Bills and Gladstone and such, whose '... grandeur, wealth and splendour, pervading comfort' (now that the shoe is on the other foot this is usually referred to as 'American materialism') 'make one repine that one's lot is cast anywhere else. We are poor and coarse and unrefined and there are so many things to disgust and feel ashamed of, that I really think the true way is to insist on our claim of relationship to England and feel proud of her glory and greatness, and keep our complacency in that way for the next hundred years.' ...

"Part of this somewhat nauseating snobbism was political; that is, derived from his Federalist hatred of democracy in theory and of Jackson in practice.

'My hatred of democracy is stronger than my love of country. Truly, as the newspapers say, we live in a favored country. The cold of Russia, the heat of Africa; drought, disease, and democracy make up a combination of blessings. Nothing is done with reference to the wishes or opinions of the educated classes; hence the war against the Bank [of the United States] and the cry against the rich and the 'aristocrats.' I always vote against the popular side on principle. '

"These are sentiments which could have been uttered almost word for word by any good New Deal-hating Old Philadelphian a century later in the 1930's, before the Second World War, like the Civil War, stirred up a latent patriotism.

"To one with such an attitude, naturally, politicians are a low sort of vermin, and engagement in public life is no fit occupation for a gent. Mr. Ramsey, an acquaintance from Dickinson College days,

'is now on his way to Washington, a member of Congress. This sounds great but nowadays political success implies little merit of any kind. On the contrary the most educated and virtuous men avoid public life and from the interior of our Boeotian State [that is, western Pennsylvania] the favorites of the democracy are seldom distinguished for anything but vulgarity, want of principle, etc. well ... but he seems more of a gentleman.'

"Having met the Governor of Pennsylvania, Fisher feels kindly disposed, since he is after all not a Democrat and hence at least on the right side. 'Ritner is a bluff good-humored, honest-looking fat Dutchman, without the slightest approach to the appearance or manner of a gentleman. This however is not to be expected in a Governor of Pennsylvania.' ...

"This is all somewhat unfair to ... Sidney, as it presents them at their most exasperated. ... In the end, he even accepted and admired Lincoln, that apostle and representative of dreadful Democracy, and so presumably changed some of his opinions a little bit.

"On the whole, however, Sidney, and most Old Philadelphians, are more inclined to subscribe to his pithy statement, 'If we must submit to democracy in the government, let us at least keep it away from our social circles.' "