Today's selection -- from Red Fortress by Catherine Merridale. What we now know as Russia began when bands of Viking traders known as the Rhos or Rus came to Kiev circa 800 CE and started to intermarry with Slavs. Many soon moved on to the city of Moscow. These Vikings were regarded as such barbarians that they were banned at first from entering the city of Constantinople -- which was at that time the dominant influence in the region. However, they were dazzled by Constantinople and ultimately abandoned their paganism to adopt Constantinople's version of Christianity. Of course Kiev is now the capital of Ukraine, and currently the scene of deadly riots rooted in a dispute over the competing influence of the Russians versus the European Union in that country. This conflict is partly rooted in ethnic differences within the Ukraine:

"[The area where we find modern day Russia and the Ukraine] seemed to be a dangerous, exotic place, where fortunes waited for adventurers. Human slaves were one source of profit, for while Muslims and Christians were forbidden to enslave each other, the pagan Slavs were fair game. The appetite for fur, meanwhile, seemed to be inexhaustible, and it was purchased by everyone from the Arabs and Turks of Asia to the Franks and Anglo-Saxons of Europe's Atlantic fringe. ... If the goods could be brought to market -- in Constantinople, maybe, or Bolghar, the great city on the Volga route towards the east -- serious money, silver, was on hand to pay for them.

"The profits on offer, and the many opportunities to set up customs posts and levy taxes on the precious freight, meant that the trade routes were worth fortunes, but the local Slavs were neither organized nor swift enough to take control of them. Instead, the prize fell to some bands of Vikings from Scandinavia, soon known to Greeks and Arabs as Rhos. This used to be another controversial issue (Russian nationalists resented the suggestion that their founding princes might have come from somewhere else), but the archaeological evidence around the Baltic is conclusive. ... They were ambitious, warlike and incorrigibly mobile. In 860, they even managed to attack Constantinople, the heir of Rome, by closing on the great walled city from the sea. Before long, they had wrested the Dnieper capital of Kiev from the people known as the Khazars and mounted a succession of campaigns against Slav settlements as far east as the middle Volga. ... 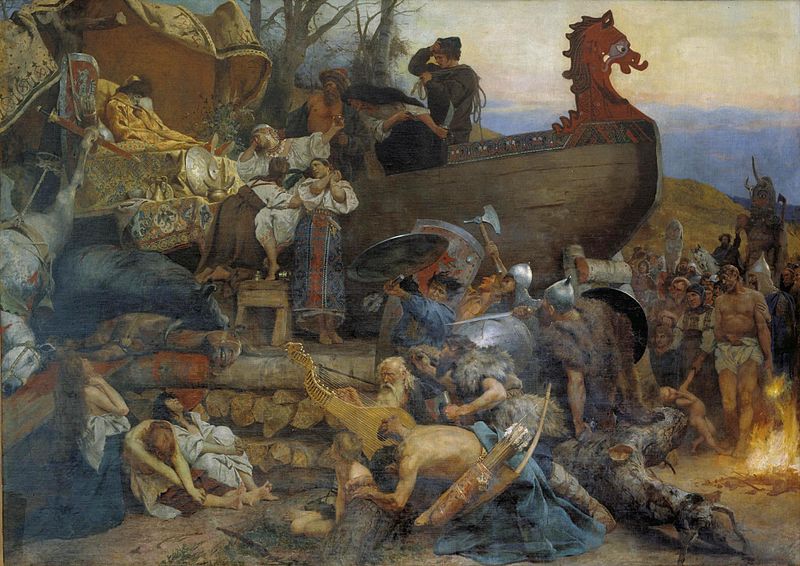 Ship burial of a Rus chieftain as described by the Arab traveler Ahmad ibn Fadlan who visited Kievan Rus' in the 10th century.

"These Vikings -- referred to now by most historians as the Rus -- were not above consorting with the regions older tribes. ... Over time the Rus and native Slavs began to merge and even intermarry, sharing a landscape and its local gods and inventing new stories, in a common language, to make sense of their world. They were not yet a single people, but the foundations of a culture had certainly been laid. n