Today's selection -- from One Summer: America, 1927 by Bill Bryson. The decade of 1920s was the age of the skyscraper throughout America, and in 1926 alone more than one thousand skyscapers were being constructed or rebuilt. Even Beaumont, Texas had more skyscapers than London or Paris, but half of America's skyscrapers were in New York city -- along with three million daily commuters and as many as 50,000 people in the same block. The bank loans to build these skyscrapers were part of an enormous boom in lending that brought the Crash of 1929 and the Great Depression:

"In the 1920s America became a high-rise nation. By 1927, the country boasted some 5,000 tall buildings -- most of the world's stock. Even Beaumont, Texas, had six buildings of ten stories or higher, which was more than Paris, London, Berlin or any other European city. J. L. Hudson of Detroit in 1927 opened the world's tallest department store at more than twenty stories, and Cleveland saw the topping out of the fifty-two-story Union Terminal Building, the second tallest building in the world*. Los Angeles instituted strict limits on building heights -- which is partly why L.A. sprawls so today -- but still allowed the City Hall to rise to twenty-eight stories in violation of its own ordinances. It was as if the country couldn't stop itself from building ever upwards.

"As buildings grew taller, the number of workers pouring into city centers grew and grew. Boston by 1927 had 825,000 people a day coming into its downtown -- or more than the entire population of the city. Pittsburgh absorbed 355,000 workers every day, Los Angeles and San Francisco 500,000 each, Chicago and Philadelphia over 750,000 apiece; and New York, superlative in everything, took in a whopping daily load of three million.

"In 1927, New York had just overtaken London as the world's largest city, and it was easily the most cosmopolitan. A quarter of its eight million residents had been born abroad; it had more foreign-born residents than Philadelphia had people. Native-born Americans were flocking to it, too. Two hundred thousand southern blacks had moved to New York since the end of the First World War, and now the Mississippi flood was sending tens of thousands more. 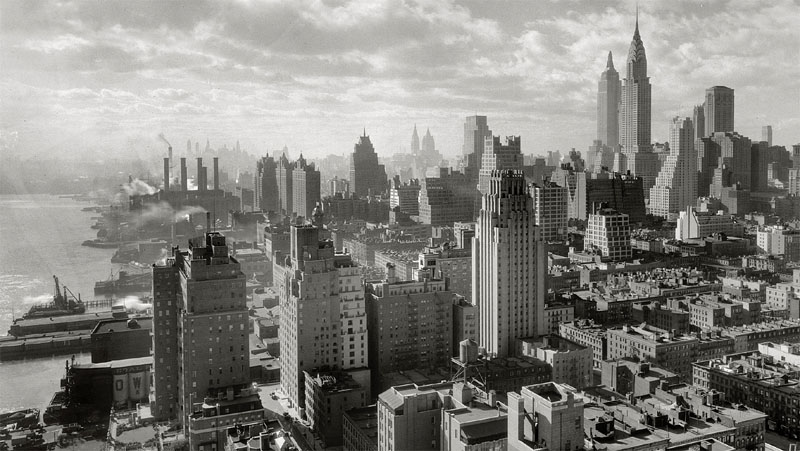 "As well as being the headquarters of many of America's principal service industries -- banking, stockbroking, publishing, advertising, most of the arts -- New York was still also the nation's largest industrial center. It was home to 30,000 factories. One tenth of all that America produced originated in the city. More than 40 per cent of the nation's overseas trade went through the Port of New York, as did the overwhelming share of international passenger traffic. As many as 12,000 passengers sailed from piers on the west side of Manhattan every day, and something of the order of 25,000 went to see them off. Such was the density of people around the docks that traffic was gridlocked daily for blocks around from 8 a.m. to 1 p.m.

"Every four years the city grew by the equivalent of a Boston or St Louis. Developers couldn't keep up. At one point in 1926, more than a thousand new office buildings were being constructed or rebuilt. To try to reduce the crowding, the City of New York enacted tough new ordinances, restricting tall buildings to big lots and forcing architects to design them with setbacks to allow more air to flow between them and more light to reach the ground. The unintended effect of this was actually to accelerate the pace of growth, since big lots required giant structures if they were to offer an economic return. It also encouraged skyscrapers to march northwards up Manhattan. By 1927, New York had half the nation's skyscrapers, and half of those were now in midtown. The canyon-like streets and spiky skyline that we associate with New York are largely a 1920s phenomenon.

"Many of the new buildings added enormously to pressure on the city's stretched infrastructure. When the colossal Graybar Building, the world's largest office building, opened in early 1927 at 420 Lexington Avenue, it brought 12,000 office workers to one site. A single block in Manhattan now could easily contain 50,000 people. All this high-rise density made New York the most breathtakingly packed and challenging city in the world in which to live.

* New York's Woolworth Building, 792 feet high, built in 1913, was still the tallest in the world. The Chrysler Building and Empire State Building, which would both overtake the Woolworth, would not be built until 1930 and 1931