Today's encore selection -- from Brunelleschi's Dome by Ross King. In the 1400s, the height of the Renaissance in Florence -- the time of Cosimo de' Medici, Filippo Brunelleschi, Donatello, Leonardo da Vinci and countless other guiding lights -- prostitutes were required by law to wear high heels and bells on their heads, widespread homosexuality was blamed for defeat in battle, and criminals had to be imported from other cities to satisfy the people's insatiable demand for public executions:

"[After the Florentines' military defeat at Lucca] a familiar scapegoat was used to explain the Florentines' ineptness in battle: homosexuality. For years clergymen such as the Franciscan firebrand Bernardino of Siena had been raging from the pulpit that the crime of sodomy was destroying the city. So famous was Florence for homosexual activity that during the fourteenth century the German slang for 'sodomite' was Florenzer. In 1432 the government took steps to curtail this perceived root of its troubles on the battlefield by establishing an agency to identify and prosecute homosexuals, the Ufficiali di Notte, 'Office of the Night' (a name made even more colorful by the fact that notte was slang for 'bugger'). ... A less official method of detecting homosexuals was for mothers to rattle their sons' coin bags: if the coins exclaimed, 'fire fire fire' the money was said to be the gift of a sodomite. 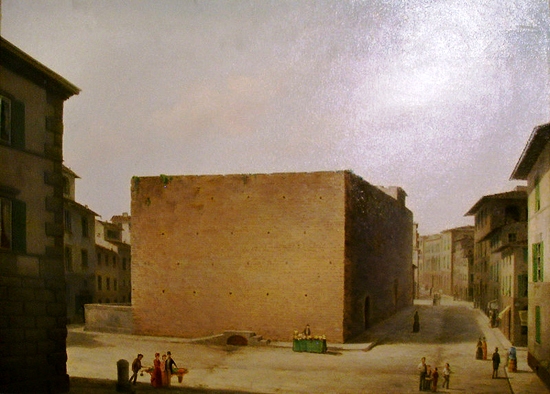 "Held ... in Florence's communal prison the Stinche ... were more serious criminals-heretics, sorcerers, witches and murderers -- for whom unpleasant fates awaited: decapitation, amputation or burning at the stake. Executions took place outside the walls, in the Prato della Giustizia, 'Field of Justice.' These were popular public spectacles -- so popular, in fact, that criminals often had to be imported from other cities to satisfy the public's demand for macabre drama.""This vice squad worked in tandem with the Orwellian-sounding Ufficiali dell'Onesta 'Office of Decency,' which was charged with licensing and administering the municipal brothels that had been created in the area around the Mercato Vecchio. The specific aim of these public brothels was to wean Florentine men from the 'greater evil' of sodomy. Prostitutes became a common sight in Florence, not least because the law required them to wear distinctive garb: gloves, high-heeled shoes, and a bell on the head. ...