Delanceyplace.com is honored to be participating in TEDxPhiladelphia this week. This week we will be emailing special excerpts based on TEDxPhiladelphia's theme "The New Workshop of the World".

Today's encore selection -- from Europe Between the Oceans 9000 BC-AD 1000 by Barry Cunliffe. Before Plato, Socrates and the Golden Age of Pericles in Athens, the center of both trade and innovative thought in the world was Miletos, situated on the Mediterranean coast of what is now Turkey. What emerged at Miletos was truly revolutionary -- civilization's first attempt to replace myths with rational thought. In Miletos, the first map of the world was likely drawn, and Hecataeus wrote the works that gave him claim as the father of both geography and history. The first coins were likely minted here. Once jutting out into a wide bay fed by the river Menderes and surrounded by fine harbors, today the city is a gaunt ruin, isolated by the marshlands that have crept relentlessly seawards, a victim partly of changing sea levels and partly of erosion from the flanking hills left bare by overgrazing:

"From the early second millennium BC, the promontory of Miletos was the home of traders closely linked to the Minoan and, later, the Mycenaean world. ... Through the port of Miletos goods and people flowed, and with the sailors and traders came knowledge. For those anxious to learn of the world there could hardly have been a better place to sit and listen.

"From about 600 BC, Miletos became a centre of vibrant scholarship -- a place where thinkers attempted to counter the colourful mythical view of the world revolving around a pantheon of deities with a new rationalism based partly on observational science and partly on philosophy. The earliest of these remarkable men to whom we can give a name was Thales, active in the early decades of the sixth century. He is said to have visited and studied in Egypt and is credited with developing the belief that the world originated from water and would eventually return to water. His pupil Anaximander (c.610-545) further developed this idea of a primordial element. For him it was not water but apeiron, probably best interpreted as that which is spatially unlimited or boundless. The products of this matter -- such as wetness, dryness, heat, cold -- in paired opposites gave rise to the many worlds of the universe. Anaximander is also credited with producing the first map of the world, which he envisaged to be a disc standing on a column suspended in space in the centre of the universe. The third of this remarkable group was Anaximenes (c.6oo-526), who may have been a pupil of Anaximander. His view of cosmogony was that everything derived from air either by rarefaction, giving rise to fire, or by condensation, leading successively to wind, cloud, water, earth and stone. He was also the first philosopher to envisage a human soul, which he believed to be a component of air. 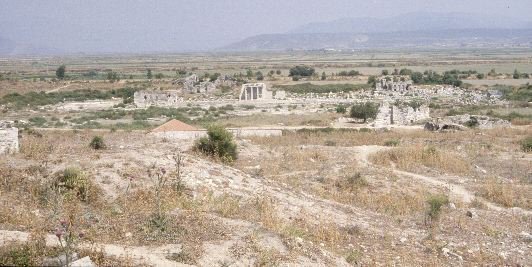 "The three Milesian philosophers brought about a profound change in thought in the early part of the sixth century -- a revolution that was to set the scene for the growth of philosophy in Athens in the following centuries. While one can discern there the influences of Babylonian and Egyptian thought, what emerged at Miletos was truly revolutionary. It attempted to replace myths dependent on the machinations of the gods with rational thought.

"In this cradle of intellectual excitement, some time about 530 BC, Hecataeus was born. His two works, Histories and Journey Round the World, justify the claim that he was father of both history and geography. Neither work survives but several hundred fragments of the latter are quoted in the writings of his successors. The Journey was composed of itineraries through Europe and Asia along the shores of the Mediterranean and the Black Sea, but it also included additional material on Scythia and India. From the surviving scraps it is possible to reconstruct a map sketching the world as Hecataeus envisaged it. His sources were various. He appears to have made journeys of his own, but from his favoured position at Miletos he would also have been able to draw on the knowledge of travelers coming from far afield. According to Pliny the Elder, Miletos had been responsible for founding ninety colonies, many of them around the shores of the Black Sea. ... Hecataeus was careful to avoid anything that sounded like myth, priding himself that 'What I write here is the account that I believe to be true. For the stories told by the Greeks are many, and in my opinion ridiculous.' "