Today's selection -- from GDP: A Brief But Affectionate History by Diane Coyle. Before and after its crisis, the country of Greece was calculating its GDP -- a critical economic number its own lenders relied on -- in a dusty backroom without computers. There was evidence it was "cooking the books," but the man sent in by the European Union and IMF to correct this misreporting was charged by Greece with "betraying the national interest," a crime that carries a potential life sentence:

"'In Greece, statistics is a combat sport'. Andreas Georgiou was speaking after the announcement that he would be facing criminal charges and a parliamentary inquiry. A distinguished man who had previously spent many years working at the International Monetary Fund (IMF) in Washington, DC, Georgiou could be played by George Clooney in the movie about the European economic catastrophe. In late 2010 he became the head of Elstat, Greece's new official statistical agency, parachuted into the job by the European Union (EU) and the IMF. Within weeks his emails were being hacked, and within months he was accused by recently sacked board members of the old official statistics agency of acting against Greece's national interest. In a case that has bitterly divided opinion in Greece, prosecutors subsequently charged him with the felonies of dereliction of duty, making false statements, and falsifying official data. His crime? Trying to produce accurate statistics on the Greek economy after decades during which official statisticians had massaged figures at the behest of politicians. The stakes were high, as rescue funds to bail out the Greek government and prevent the economy from collapsing depended on the achievement of tough targets for reducing how much the government was spending and borrowing. The targets were expressed as a ratio of the budget deficit to GDP -- Gross Domestic Product, the standard measure of the size of a country's economy. GDP is a familiar piece of jargon that doesn't actually mean much to most people. This book is the story of how this statistic came to be so important.

"According to an official European Commission inquiry published just ahead of Georgiou's appointment, the Greek figures had been doctored for years. The head of the National Statistical Service of Greece (NSSG, the predecessor to Elstat) had earlier that year, in some desperation, contacted European officials in Brussels, 'claiming official interference over the provision of figures.' The inquiry concluded that there had been repeated misreporting of figures, that the Greek government could not keep track of its own spending anyway, and that there were grave doubts about the 'accountability of the Greek institutional framework' -- a bureaucratic phrase for the government's inability to control or even count its expenditure in a number of areas including defense spending. 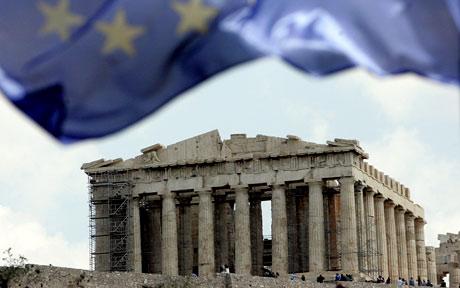 "An official inquiry was in fact unnecessary. A statistician could have told the Brussels Commissioners that the Greeks were cooking the books just by looking at the reported numbers. One potential warning signal was the announcement in 2006 that Greece's GDP was 25 percent higher than previously thought: NSSG added in an estimate of the value to the economy of off-the-books activities, hidden from the tax authorities. Greece was certainly not the only country to include in official GDP figures an estimate of the size of the so-called informal economy (as we will see later), but this large boost came at a useful time for borrowing more, as the size of GDP is key to lenders' views about the borrower's capacity to repay the loan.

"Apart from this change, and apart from the regular refusal by EU statisticians to approve the Greek numbers, made-up figures also have a statistical marker indicating that they have been fabricated. The pattern of GDP or other economic variables has a particular statistical fingerprint that is hard to falsify. These series of statistics are not random. Specifically, the first digit is not a 1 (or any other digit up to 9) one time in every nine, as would be the case with random statistics. Instead, the figures are far more likely to start with a 1: the first digit will be a 1 six times more often than it will be a 9, over two times more often than it will be a 3, and so on. The fingerprint pattern is known as Benford's Law. Dr. Charlie Eppes, the mathematical genius played by David Krumholtz in the crime drama Numb3rs, uses it to solve a series of burglaries in one 2006 episode, 'The Running Man.' Greek GDP statistics did not have the Benford's Law fingerprint.

"The European Commission report was clear -- it is some of the bluntest bureaucratic language I have ever read -- that Greece's Ministry of Finance was instructing the official statisticians what the deficit and GDP figures needed to be in order to keep the loans flowing. ... As it happens, my good friend Paola Subacchi, now director of economics at the distinguished international affairs think tank Chatham House, had visited NSSG in 2002. She flew to Athens, and took a taxi to an address that turned out to be in a residential suburb. She says: 'It was in a square of ordinary shops, and I had to hunt for a doorway in a 1950s apartment block that took me up some stairs to a dusty room with a handful of people. I can't remember seeing any computers. It was extraordinary, not a professional operation at all.' No wonder the IMF and European Commission wanted to send in Mr. Georgiou to create a new statistical agency as a condition of lending the rescue funds to the Greek government. There might yet be nasty surprises to uncover. 'I am being prosecuted for not cooking the books.' he said after he was accused of betraying the national interest, a crime that in theory carries a potential life sentence."