Today's selection -- from The Quest by Daniel Yergin. The rapidly emerging solar power movement stems from a discovery and explanation put forward by twenty-six year old Albert Einstein in 1905. According to futurist Ray Kurzweil, the price performance of solar power is now doubling every one to two years -- a rate reminiscent of Moore's law itself -- which could portend its dominance in the energy sector within one to two generations:

"Before Einstein had put pen to paper in 1905, earlier scientists and engineers had already observed the photoelectric effect -- that in some circumstances light could produce an electric charge -- but they just could not explain it. A few scientists and engineers worked with the element selenium, producing electric current by exposure to sunlight, and even candlelight. Werner Siemens, the founder of the Siemens engineering company, proclaimed that 'the direct conversion' of the 'energy of light into electrical energy was an entirely new physical phenomenon' that required 'thorough investigation.' It was left to Einstein to explain the why.

"Until that time, physicists insisted that light was a wave moving through the ether -- an invisible substance that supposedly suffused the universe. Einstein thought otherwise. Light, he said in his paper on the photovoltaic effect, was made up of tiny particles called quanta, also known as photons, that moved at 186,000 miles per second and were indivisible.

"It was this paper that established the science that explained photovoltaic reactions. When sunlight descends on solar photovoltaic cells, the photons are absorbed. They dislodge and displace electrons within the semiconductor. These loose electrons flow out of the silicon along minute channels -- almost like water flowing through a canal -- as electric current. The photons are one form of energy, and the electrons another form.

"Einstein received the Nobel Prize in 1922 not for the paper that laid the basis for nuclear energy, but rather for this paper on photons and quantum mechanics -- for 'his discovery of the law of photoelectric effect,' in the words of the award.

"But theory is one thing. It would take a half century after Einstein's paper for the real breakthrough in putting the theory to practical use. That feat occurred in 1953 at AT&T's Bell Labs, in New Jersey. There two scientists, Gerald Pearson and Calvin Fuller, were trying to develop an improved transistor for communications, a device that also happened to have been invented a few years earlier at Bell Labs. But now Pearson and Fuller discovered, to their surprise, that silicon panels that were doped -- that is, contaminated with a deliberately introduced impurity, in this case gallium -- achieved the alchemic reaction described in Einstein's paper. The light was transmutated into electricity. 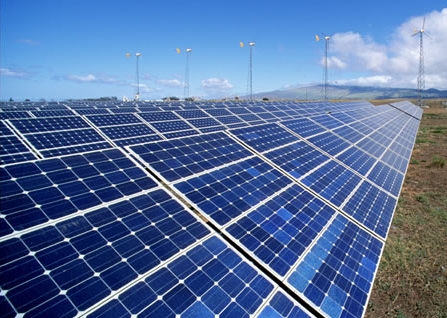 "A year later, after much further experimentation, the Bell Labs scientists unveiled 'the first solar cells capable of producing useful amounts of power.' To dramatize their discovery when they presented it to the National Academy of Sciences in 1954, they used the solar cells to power a small radio transmitter. But that would only be the beginning. Bell Labs declared that these new solar cells would 'profoundly influence the art of living.' 'Vast Power of the Sun Is Tapped by Battery Using Sand Ingredient,' trumpeted the New York Times, which reported that this invention 'may mark the beginning of a new era' and 'the realization of one of mankind's most cherished dreams -- the harnessing of the almost limitless energy of the sun for the uses of civilization.' Yet the initial step along the commercial path was more down to earth: providing power for rural telephone lines near Americus, Georgia.

"However, these photovoltaic cells were not very efficient, and they were very costly. Aside from rural phone lines, where could they find any use at all?"