"Life in America in 1815 was dirty, smelly, laborious, and uncomfortable. People spent most of their waking hours working, with scant opportunity for the development of individual talents and interests unrelated to farming. Cobbler-made shoes being expensive and uncomfortable, country people of ordinary means went barefoot much of the time. White people of both sexes wore heavy fabrics covering their bodies, even in the humid heat of summer, for they believed (correctly) sunshine bad for their skin. People usually owned few changes of clothes and stank of sweat. 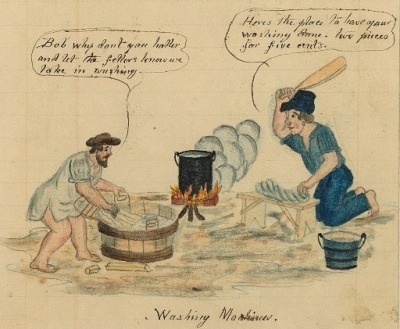 "Only the most fastidious bathed as often as once a week. Since water had to be carried from a spring or well and heated in a kettle, people gave themselves sponge baths, using the washtub. Some bathed once a year, in the spring, but as late as 1832, a New England country doctor complained that four out of five of his patients did not bathe from one year to the next. When washing themselves, people usually only rinsed off, saving their harsh, homemade soap for cleaning clothes. Inns did not provide soap to travelers.

Having an outdoor privy signified a level of decency above those who simply relieved themselves in the woods or fields. Indoor light was scarce and precious; families made their own candles, smelly and smoky, from animal tallow. A single fireplace provided all the cooking and heating for a common household. During winter, everybody slept in the room with the fire, several in each bed. Privacy for married couples was a luxury. ...

"It was a young society: The census listed the median age as sixteen, and only one person in eight as over forty-three years old. Women bore children in agony and danger, making their life expectancy, unlike today, slightly shorter than that of men. Once born, infants often succumbed to diseases like diphtheria, scarlet fever, and whooping cough. One-third of white children and over half of black children died before reaching adulthood. The women had enough babies to beat these grim odds. To help them through labor, neighbors and trained midwives attended them. Doctors were in short supply, hospitals almost unknown. This proved a blessing in disguise, for physicians then did as much harm as good, and hospitals incubated infection. The upside of rural isolation was that epidemics did not spread easily."