Today's encore excerpt shows the style of Frank Sinatra in expressing his love to the women in his life:

"Another [Sinatra] trademark: He adored openly and gave not a damn who saw. In the middle of parties, amid any gathering, he blurted encomiums of love and appreciation: 'Doesn't she look radiant?', he would say of Bacall. ('I remember feeling so happy,' she said of such eruptions.) Whatever his latest elations and fancies, they were always made grandly audible: 'No one prettier has ever been in my house!' 'You're beautiful tonight!' 'You look mah-velous!' (That was in fact exactly how he said it.) Public proclamation did not faze him; after all, he sang the same sentiments on records and stages—legendarily making every woman feel that he sang only to her.

"Thus, in 1965, to his still-secret girlfriend Mia Farrow, thirty years his junior: He popped his head out of the Palm Springs swimming pool, adjacent to the golf course. And there, dripping chlorine with house guests agape, he bellowed toward her 'I love you!' Recalled one witness, 'If anyone had been on the Tamarisk seventeenth green that second, they would have had the scoop of the year.' Before becoming at age twenty-one, the third Mrs. Frank Sinatra, Mia Farrow had shorn her locks, cropped them all but off, stirring a nationwide hubbub. (She was then an ingenue on television's Peyton Place, whose mailbags lumped with outrage de coiffure.) 'But,' she later wrote, 'there was no drama, no fight with Frank, he loved my hair the minute he saw it, so I kept it short for years.' Indeed, he promptly gave her a pale yellow Thunderbird—'to match your hair.' 'I'm proud of her', he announced to everyone, crowing of her beauty and her brains and her bangs. ...

"While he was wooing Barbara Marx, his broadcasts took on epic sweep. He was loud and unabashed—throughout courtship, then marriage—before the eyes of Hollywood royalty, heads of state, or clustered intimates. He toasted her everywhere, lavishly so. She would say, 'I've never known anything like it. He lifts his glass and says, 'I drink to you, my love, because I adore you!' He doesn't care who hears it.' Angie Dickinson, who beheld these demonstrations, would attest, 'He's great to her that way. What other man could really get away with that? But, of course, we know that the king can do things his subjects cannot.' Citing other such attentions, Barbara Sinatra continues: 'We can be in the middle of a huge party and he'll come and whisper the most sexy things in my ear. When we were dating, he would send a wire almost every day from wherever he was, and flowers every day. He would call and say, 'just called to tell you that I love you', then hang up. There'd be no further conversation than that. It would knock me out. He's just a wonderful romantic.' " 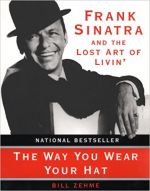