"The words and commentaries that I write express the vision that inhabited me even before I started the piece. First comes the name (the title) of the piece; secondly I wait for the vision to come; then I make it real. I never make preliminary drawings. The vision gives me all I need, even the shape and the colors .... I am a designer, an architect, a sculptor, engineer, artist."

"Bodys Isek Kingelez is one of the unsung visionary creators of the twentieth century. A lifelong resident of what is now the Democratic Republic of the Congo, Kingelez developed a notably individualistic style that is beholden to no obvious artistic precedents. Beginning In 1978 with his very first artwork, the result of a feverish session with 'some scissors, a Gillette razor, and some glue and paper,' his oeuvre took a unique form, in sculptures of mixed paper and other ephemeral materials that suggest miniature architectural structures. Dazzling in color and decoration, the works grew in scale and complexity overtime, from models of individual buildings to intricate cities complete with roadways, billboards, and public monuments.

"Kingelez was a formidable figure. Remarkably self­-assured, he believed of his work that 'since time immemorial, no one has had a vision like this,' and he aimed to be a force for good in the world, hoping, he said, that 'architects and builders worldwide can try to learn from my perceptions so as to help the forthcoming generations. I'm dreaming cities of peace. I'd like to help the Earth above all.' He was a complicated person, at turns outgoing and reserved, and the making of his work was all-consuming; to some, he seemed most comfortable in the fantastical world of his own creation. Beauty was a paramount concern, not only in his art but also in his dress, and while he didn't go to the theatrical lengths of Kinshasa's famous dandies -- the label-loving sapeurs -- his personal style reflected the perfection he aimed for in his sculptures: 'The shirt, jacket, and shoes need to be harmonious,' he declared. This holistic attitude and desire for harmony aligned with his aspiration to make the world a better and more beautiful place through his work.

"Kingelez's practice, though unquestionably appealing to curators, critics, and art historians, has presented them a maddening challenge. In collapsing the boundaries between sculpture, architecture, and design, it eludes the categorization and classification on which institutional collections rely, and in its lack of known art historical precedents it evades the genealogy that we love to document and trace. As a result, although Kingelez has been included in some of the most important visual art exhibitions of the last forty years -- the groundbreaking Magiciens de la terre in Paris in 1989; The Short Century: Independence and Liberation Movements In Africa, 1945-1994, a paradigm-shifting show that opened In Munich In 2001; the acclaimed documenta 11 in 2002; and biennials in Johannesburg, Dakar, and São Paulo, among others -- very little has been written about him and his work." 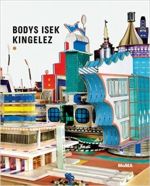