Today's selection -- from Sawbones by Justin McElroy and Dr. Sydnee McElroy. Spontaneous combustion can occur in humans and animals. Here is why:

"The first incident of spontaneous human combustion seems to [have] occurred the 17th century. In 1663 Danish anatomist Thomas Bartholin wrote about the case of a woman in Paris who 'went up in ashes and smoke' in her sleep, leaving her mattress mysteriously unmarked by fire. (Okay, there was also a guy in the 1400s who supposedly drank so much wine that he vomited fire. Radical, but not spontaneous combustion.)

"There've only been a few hundred reported cases of spontaneous human combustion in the intervening centuries, many of them in very similar circumstances. The victim is often an alcoholic, and usually limited in mobility by age, weight or illness.

"Victims are often found near a fireplace or in a room with candles -- which may have you wondering what exactly is so mysterious about this. The unusual part is that the fire often consumes only the body's trunk, leaving the arms, legs and head lying awkwardly around a pile of ashes in, an otherwise spotless room.

"Fine question, but if we had cracked spontaneous combustion, you probably woulda seen that on the news. We have cooked up a number of theories over the years. The fact that many of those who supposedly combusted had been heavy drinkers led to speculation that a lifetime of alcoholism could be the key factor. This idea was widely accepted in the Victorian era, particularly after the mid 1800s when Charles Dickens, at the height of his fame as a novelist, consigned the alcoholic character of Krook in his wildly popular Bleak House to this fiery fate.

"Others have speculated that intestinal methane could somehow ignite in the body. That's right, kids: Lighting your farts is funny, but it might just be fatal. ...

"Even today, the occasional news story surfaces, as in 2015 when the Times of India reported the death of a baby who according to his parents, had burst into flames several times in his short life.

"Modern medicine's explanation might seem kind of boring at first, but don't worry. Like most interesting things in science it gets really weird and gross. The boring part is that as you might have suspected, passing out drunk next to a fire or dozing off with a cigarette can lead to catching on fire. No methane needed.

"So why didn't the fire scorch all those mattresses and chairs, let alone the victims' legs, arms, and sometimes heads? There's a phenomenon known as the Wick Effect (sorry, nothing to do with Keanu) that explains it. A candle, burning ember, or lit cigarette may burn through clothing, making only a small hole and remaining hot enough to burn through a person's flesh and begin melting their body fat. Contained by the victim's clothing, the burning fat incinerates everything inside without damaging surrounding objects. The fat fire may burn itself out before spreading to the extremities. As one writer put it, the victim is turned into an inside-out candle. Aren't you glad you asked?

"This phenomenon is generally referred to as spontaneous human combustion, but animals can get in on the fun too. A dead beached whale, for example, can fill with methane as it rots and combust rather dramatically. A few species of ant in Asia defend their colonies by, basically, blowing themselves up (although, to be fair, not actually bursting into flame). It's more of an extremely dramatic ant-splosion." 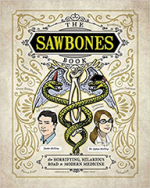