Today's selection -- from Maxfield Parrish: A Retrospective by Lawrence S. Cutler and Judy Goffman Cutler. Maxfield Parrish's painting Daybreak was the most popular art print of the 20th century. He developed his use of bold color and exquisite detail at Philadelphia's world-renowned Pennsylvania Academy of Fine Arts:

"Enrolling in The Pennsylvania Academy of Fine Arts in 1894 was a momentous step on Maxfield Parrish's path of development as an illustrator. At the Academy, everything he an loved seemed to come together: the etcher's exactness, as taught by his father; woodworking skills acquired at Haverford's model shop; his own clear vision as a young architectural student; and the glazing techniques of the Old Masters witnessed firsthand in the halls of the Louvre. The Academy put it all into focus and expanded his knowledge from the intuitive to the profes­sional. Founded in 1805 it was the oldest art museum and the best art school in the country, and consequently it attracted the finest talent, with teachers such as Thomas Eakins and students like William Glackens. Experimenting with new techniques was encouraged, and twelve years before Parrish enrolled, Eakins had his students painting from photographs, rather than live models. It was clearly the right place for Maxfield Parrish.

"Philadelphia itself was a center for the arts in the 1890s. Eadweard Muybridge was lecturing at the University of Pennsylvania. Drexel Institute had lured Howard Pyle to found the first school of illustration in the country (Parrish audited his classes there). John Sloan was the lead illustrator for the Philadelphia Inquirer. The entire country looked to Philadelphia as its cultural mecca. In the midst of all this, Parrish was germinating his own thoughts, absorbing and molding them into a great talent. ...

"Parrish learned concepts of bold color and photography at the Academy under the realist/colorist painter, Thomas P. Anshutz. Anshutz was thoroughly committed to craftsmanship, the use of photography, and an understanding of scientific color theory. He experimented with unmixed colors and encouraged his students to do so as well. He used photography as studies for paintings and promoted the same practice among his stu­dents, which included Charles Demuth, John Marin, Everett Shinn, and Charles Sheeler. Parrish immediately saw the oppor­tunities that the camera afforded the artist, and it became a pas­sion for him -- vigorously encouraged by Anshutz. Parrish employed photography for documenting models, laying out painting structures, and recording his finished works. ...

"Once Parrish established his own techniques and routines, he steadfastly followed them throughout his career. He made his own stage sets in order to take photographs of his models in context; he even set up little clusters of rocks on mirrors and took photographs of them for his inventory of backdrops. ... He painstakingly glazed over each layer of his paintings, using a white background (which reflected the color back to the viewer's eyes, giving the surface a luminescent quality and pure colors. He often made the frames for his works with columns and molding of intricate detail, and he went to great lengths in making the crates in which to ship his works, sometimes even decorating the insides and outsides with paintings. The shipping labels were adorned with cartoon characters and graphic designs." 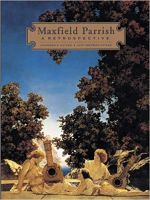