Today's selection -- from Tycho & Kepler by Kitty Ferguson. At the age of thirteen, the explosive rift between Lutherans and Calvinists caused Johannes Kepler to silently resolve to examine disagreements and arguments himself, and come to his own conclusions. Deeply religious, he further came to the view that God had created a universe of harmony and order, and it was his challenge to find the hidden rules that governed that harmony. These beliefs led to a revolution in science:

"It was at about the time that Kepler left Latin school to enter Adelberg that he first became aware of a potentially explosive rift in the Protestant world. He heard a sermon in Leonberg given by a young deacon who spoke vehemently and at length against the Calvinists. Twelve-year-old Kepler went away deeply worried about this harsh controversy between those who adhered to slightly differ­ent confessions of the same faith. At the age of thirteen, he wrote a letter requesting that the University of Tübingen send him copies of Martin Luther's disputations. Kepler decided to make it a practice, whenever he heard a preacher or lecturer argue about the meaning of the Scriptures, to consult the passages himself rather than to take anyone's word for what they meant. He usually decided that both in­terpretations had good points. This was not a healthy attitude for a young man who was hoping someday to find himself in a Lutheran pulpit -- indeed for anyone wanting to survive unscathed in the political/religious milieu of the late sixteenth and early seventeenth centuries. Rather than win friends in both camps, it was likely to make enemies all round. As Kepler recalled his youthful inclination to see all sides of an argument: 'There was nothing I could state that I could not also contradict.' It was a gift, and sometimes a curse, that would remain with him all his life.

"Kepler also encountered the writings of Cardinal Nicholas of Cusa, who had insisted a century before Copernicus that Earth did not lie motionless in the center of the universe. Kepler reported, 'I have by degrees -- partly out of Mästlin's lectures, partly out of myself -- col­lected all the mathematical advantages which Copernicus has over Ptolemy.' ...

"Kepler came openly to the defense of Copernican astronomy in two formal academic debates during his university years [well before Galileo]. He used his religious arguments along with others that sounded more like those of an astronomer. For instance, he argued that the time each planet takes to complete its orbit, and the planets' distances from the Sun, made better sense in the Copernican arrangement. The Sun was the source of all change and motion, and therefore it would not be sur­prising to find that the closer a planet was to the Sun, the faster it traveled -- a line of thought that would prove fruitful for Kepler in the years to come.

"From the Pythagoreans and Plato, as well as from neo-Platonic thinkers of Kepler's own era, he absorbed another idea that under­girded his preference for the Copernican system and guided his spec­ulation and the course of his research from that time on. The philos­ophy that had impelled Copernicus to put the Sun in the center of the universe and had inspired the design of Tycho's [home and observatory of] Uraniborg was the worldview insisting that a profound hidden harmony, simplicity, and symmetry must surely underlie all the apparent complication and complexity of nature. This notion set fire to the spiritual and sci­entific imagination of young Kepler. A universe created by God could not be other than the perfect expression of such underlying or­der. What the goal of transforming astronomy was for Tycho Brahe, the search for this harmony in nature became for Kepler: an obses­sion that would occupy him for a lifetime." 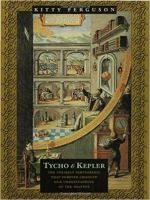