Today's selection -- from The Self-Portrait edited by Tobias G. Natter. The very first self-portrait in Western art, by the revered Renaissance artist Albrecht Dürer of Nuremberg:

"In 1943 Princeton University Press published the great monograph on Albrecht Dürer by the emigre art historian Erwin Panofsky. ... Panofsky ... spoke of Dürer's pioneering self-portraits. Panofsky interpreted the self-portrait of 1498 now in the Prado in Madrid as a synthesis of Flemish and Italian influences, pointed to the social ambitions of the young genius, and considered it probable that it was 'the first independent self-portrait ever produced. A German artist is thus said to have introduced the process of artistic introspection that has fascinated viewers ever since.

"The famous self-portrait of 1500, which draws on presen­tations of Christ as the Salvator Mundi and is now in the Alte Pinakothek in Munich, was regarded by Panofsky as proof of a 'mystical identification of the artist with God'. Panofsky ultimately regarded the masterly engraving Melencolia I of 1514, the history of whose influence cannot be overes­timated, as a spiritual self-portrait by Dürer. In the process, he also identified the problematic side of the artistic genius (always, as a child of Saturn, being exposed to the spiritual danger of brooding self-doubt, even madness), but also how it may be averted through art.

"These paintings by Dürer are the foundation on which German and Austrian painters of the centuries that followed could build their own artistic, sometimes emphatically nation­al artistic identity, and in some cases they did so explicitly. The reception of Durer's art could certainly be ambivalent -- seen as too sweetly classical and too close to Italy on the one hand, or too dark and fantastical on the other -- only heightened the fascination of this artist for subsequent generations of painters. Not only did he paint what is perhaps the very first self-portrait, but in 1840 one of the first ever monuments to an artist was erected for him." 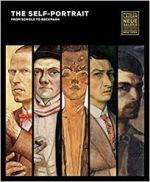