Today's selection -- from Atlas of Indian Nations by Anton Treuer. The tribes of northeastern America were complex, vibrant, and -- before European settles arrived -- populous:

"The Northeast is one of the richest places on Earth. Although Europeans would get rich by stripping away the largest copper, nickel, and iron ore deposits in the world, harvesting the largest virgin stands of white pine timber, and farming millions of acres of prime agricultural land, Native people saw a different kind of wealth. The region provided so much fish, wild game, wild rice, and arable land that it supported a substantial tribal population. The population density rivaled some of the more populated parts of Europe, which was a tremendous source of strength but also a weakness. Because the Northeast was one of the first parts of the continent continually colonized by Europeans, the sustained Contact between whites and Indians made those disease outbreaks more frequent and disastrous. Most estimates place the Native death toll at 95 percent of the tribal population.

"The tribes of the Northeast had highly developed political systems and networks of alliances. The wealth of the land led to competition over resources between tribes, and when the French and British entered the fray, the scale of the conflict rose to epic levels. Both France and England issued genocidal edicts aimed at various tribes and nearly succeeded in completely eliminating some. ...

"In the Northeast, it was not simply the strong individual tribes that survived -- it was those who leveraged greater strength from alliances with other tribes and with Europeans who were able to dominate the territory and emerge from the colonial era intact. The Iroquois Confederacy, and other tribal alliances were the means to survival and, for some, an increasing territory and standard of living for a long time after European contact.

"Almost every tribe in the Northeast originated from one of three mother groups: Algonquian, Iroquoian, or Siouan. The Algonquian (or Algic) people were at one time a single group with one language, but as they spread out throughout the Northeast and migrated west, they diversified in language and culture. Twenty-seven tribes trace their origins to this mother group, including the Ojibwe, Ottawa, Potawatomi, Menominee, Micmac, Wampanoag, and Powhatan. Algonquian tribes typically built wigwams and other domed structures. They fished more than they hunted and farmed more than they fished. Even as the Algonguian tribes changed and diverged several cultural commonalities remained, among them a strong, patrilineal clan system that was one of the primary determining factors in what kind of positions people assumed in life -- political leadership, protection, medicinal practice, and so on. Although rapid geographic dispersal and marriage with Europeans challenged the clan system for many Algonquian peoples, clan remains an obvious surviving attribute of their culture.

"The Iroquoian tribes formed the second largest group of Indians in the Northeast. Like the Algonquian tribes, they sprang from one mother group and diversified over time. They, too, maintained a sophisticated clan system. However, for Iroquoian tribes, clan was passed down matrilineally (through the mother), meaning Iroquoian women held a high degree of power. The longhouse dominated Iroquoian architecture, and many families shared a single longhouse, joining whole communities together in everyday life with sophisticated kinship networks and ceremonial functions. Iroquoian people were famous for their agricultural innovations cultivating the three sister crops of corn, beans, and squash, and more than other tribes in the Northeast they relied on farming, with much less augmentation from gathering, fishing, and hunting. 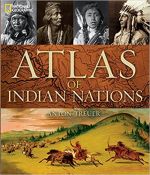