"Nettie Stevens was born in 1861 in Vermont. She pinched pennies to pay for her education, and often taught classes to help pay her way. She had a very long road to follow to get to her short but groundbreaking career. Nettie slowly finished her undergrad education at the newly formed Stanford University in California. After earning her master's degree, her interest in genetics brought her back to the East Coast, where she received her PhD at Bryn Mawr College at the age of 41.

"The big question in genetics at the time was a simple one: what makes a baby girl or a boy? At the time, sex determination was still a mystery. For centuries doctors thought sex was determined by what a woman ate during pregnancy or how warm she kept her body. Nettie and other scientists had their suspicions that there was more to sex determination than that.

"Nettie got to work by dissecting bugs. She took the sex organs from butterflies and mealworms to look at the cells under a microscope. Male insects had an XY-shaped chromosome, and females had an XX. Her flawless technique and use of different kinds of bugs strengthened the hypothesis she made based on her observations. In 1905 she published her groundbreaking research in a 2-part book, which overturned hundreds of years of misconceptions.

"Around the same time, Edmund Wilson, Nettie's former advisor, made the same discovery of XY chromosomes on his own, but Nettie's work had the strongest proof. She wrote about her findings with great scientific conviction, but it was received by a skeptical public. Unfortunately, her untimely death in 1912 has rendered her largely overlooked and forgotten.

"We now recognize Nettie for her amazing work, which allowed scientists to better understand sex determination and genetics." 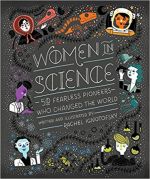