Today's selection -- from The Art of Love by Kate Bryan. Francoise Gilot and Pablo Picasso were lovers for ten years from 1943 to 1953:

"Picasso's extraordinary [artistic] output was tied to his biography: his art can be read as a diary of his life and loves. It does not always make for easy viewing, because although Picasso was a singular modern genius, who could be generous and affectionate, he was also a volatile and difficult man. He left behind him a trail of devastation as he moved on to new sources of excitement, quickly tiring of wives and lovers and overlooking his children and grandchildren. …

"Of all the important women in Picasso's life, only Francoise Gilot has survived with her heart and mind intact to tell the tale. She was the only woman to abandon Picasso, something he would never forgive her for. Like two of Picasso's other great loves before her, Fernande Olivier and Dora Maar, she was also an artist, and like them she will primarily be known as Picasso's lover, despite her many accomplishments. What set Gilot apart from the rest was her fierce intellect and her canny ability to play Picasso at his own game as he tried to capture, undermine and test her affections.

"They met in Paris in May 1943 when Gilot was 21 years old and Picasso 61. He left his table at Le Catalan, an artist's restaurant where his lover Dora Maar sat with friends, to join Gilot and her friend Genevieve. He bought them a bowl of cherries and when they told him they were both artists he burst into laughter: 'Girls who look like that can't be painters.' Despite what Picasso thought, Gilot was indeed a painter and already selling her work. Like everybody else in German-occupied Paris, she knew who Picasso was; he had by then been established for over four decades. Along with her friend, she accepted an invitation to visit him at his studio; both young artists were desperate to see his paintings. It was impossible to see Picasso's work on display in museums and galleries, as he had been labelled a degenerate artist by the Nazis, so a visit to his studio was a deliriously exciting opportunity for education.

"Gilot began to make more visits alone, and before long it became clear that Picasso was infatuated with this headstrong young artist. After six months of intellectual engagement, talking about his paintings, stealing moments alone (there was always a court present in the many rooms of the famous studio), Gilot finally conceded her heart to Picasso: 'I had not thought before then that I would ever love him. Now I knew it could be no other way. He was obviously capable of side­stepping all stereotyped formulas in his human relations just as completely as in his art.' He was technically still in a relationship with his mistress Maar, married to Khokhlova who refused him a divorce and had two children. Gilot knew what she was getting herself into: she was not infatuated with his fame and was not enamoured by his short stature; this was not puppy love. 'I knew that whatever came to pass -- however wonderful or painful, or both mixed together -- it would be tremendously important.'

"Gilot and Picasso spent ten years together between 1943 and 1953 and had two children, Claude and Paloma. For Picasso, Gilot represented a safe, idealised retreat from reality; with her, he could be pure brilliant sunshine and with others moody and belligerent. Picasso was a temperamental genius; he gorged on his own intellect and simultaneously delighted and loathed the unfaltering respect he received from all corners. His world was sycophantic: he dangled paintings before the eyes of hungry dealers, playing them off against one another just as he tormented his mistresses, once cruelly delighting in seeing a heartbroken Marie-Therese Walter and Dora Maar in a physical fight. He often tested the limits of Gilot's affection for him, and when she refused to take the bait, he would scream that she was cold, calculating and unkind. His biggest disappointment was that he could not fully command, contain or understand her.

"Unlike mistresses before her, Gilot did not energise him as a sensual object, but as an intellectual partner. They would stay up late talking about painting and philosophising, and Picasso would share dazzling insights into his unique world view and artistic mind. Gilot managed to carry on painting, despite the chaotic nature of their household and the demands of two young children and an ever more dependent partner.

"Picasso introduced his lover to his dealer Daniel-Henry Kahnweiler, who was successful at selling her paintings, mostly to US collectors. He also introduced Gilot to one of her artistic heroes, and his own friend and rival, Henri Matisse. Upon hearing how Matisse proposed to paint her, Picasso territorially made portraits of Gilot. Unlike many others before her, Gilot was thoroughly unimpressed by being a muse and asked him not to use her name for the painting titles. She loved Picasso because she was a painter not because she was a narcissist.

"For the last two years of their relationship, Gilot was exhausted and unhappy. Picasso, ever the sadist, was badly behaved and unsympathetic to her ill health, caused in large part by being denied rest in a disruptive household. Eventually, she made the decision to leave, despite Picasso threatening: 'You're headed straight for the desert.' In the same way that she entered the relationship with her eyes wide open, she left it, knowing Paris would be a poisoned chalice for her. She relocated to New York where she lives to this day, still painting at the age of 97 having outlived the great force in her life. As well as a lifetime of painting, Gilot also created a beautiful and compelling memoir chronicling her decade with Picasso. He tried to ban its publication in 1964 but failed. He would always take on Gilot and never understood why he could not win.

"He was a man that famously thought women were either 'goddesses or doormats', but what he failed to grasp, with all his macho ego, was Gilot's fundamental position. 'It's a bad idea that women have to concede. Why should they? That was not for me. Probably I was a bit ahead of my generation.' Gilot spoke to Picasso only once after she left him, on the telephone after her book was published. Her accomplishments post Paris are many, and she has been fiercely vocal about them so as not to be seen in his shadow. However, there is no escaping that one of her life's great victories was to be the only lover to outmanoeuvre Picasso." 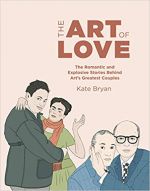